When news broke in late January of Patricia Rooney’s passing, my first thought, I confess, was “Oh, no, what am I going to write about?”

Patricia Rooney is of course the wife of the late Steelers Chairman, Dan Rooney and the mother of Steelers President of Art Rooney II.

As the sister of Mary Reagn, who served as Art Rooney Sr.’s secretary for over 40 years, Patricia Rooney saw it all. From the chronic losing, to the Super Steelers of the 70’s, the muddling mediocrity of the 80s, the rise of Cowher Power in the 1990s, to the arrival of Ben Roethlisberger in the 00’s, the 2nd Super Bowl era, and the struggle and rebuild for a 3rd ring. 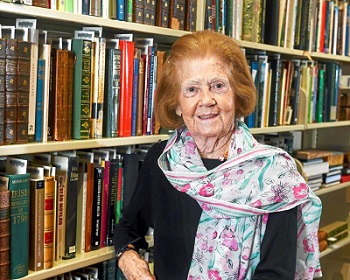 Read enough books about the Steelers, and you’ll get to know plenty of people who’ve played critical, yet almost invisible roles in shaping the destiny of the franchise. Think of people like Fran Fogarty, Joe Gordon, Ed Kiley, Buff Boston, Bill Nunn Jr. and Dan Ferens.

In Gary Pomerantz’s seminal volume Their Life’s Work, Patricia Rooney’s name is only listed on 4 pages in the Index. Ed Kiley gets 3, while Agnus Greene, wife of Joe Greene, gets 12. Steel City Insider’s Jim Wexell, who has worked the Steelers beat since 1995, relates that his first interaction with Patricia Rooney probably came at Dan Rooney’s wake in 2017.

While raising 9 children with her husband Dan, she also found time to teach English at Robert Morris University, was active in the America for Ireland Fund, and helped found the Rooney Prize for Irish Literature.

JRR Tolkien’s Lord of the Rings series has captured the imagination of both boys and girls and men and women of successive generations. My wife is hardly a fantasy buff, but our first date was to see the Fellowship of the Ring, and as I described to our nephew/Godson, when giving him his first copy of the series, “”The experience was appropriately magical.”

Yet, as critics have noted, “In Tolkien’s Middle Earth, women are infrequently seen and even more seldom heard.” That’s true. But the critic who penned that could have also continued “…but their influence is felt throughout the narrative.”

One only need glance at the outpouring of support for her on social media. The “usual suspects” such as Ryan Clark, T.J. Watt, Brett Keisel, Bill Cowher and Ike Taylor offered condolences via Twitter.

But so did the likes of Terence Garvin, who barely got 15 seconds of fame with the Steelers. But Chad Browns’s tweet brought it home better than anyone else’s, as he shared:

Steeler Nation lost a wonderful woman tonight. A few months after my daughter was born, Mrs Rooney picked out a game day outfit for her first game. She picked it out personally. Delivered it personally. It’s the football business but it’s the Steeler family. #Steelers https://t.co/WC8QYASfaY

Brown’s story suggests that those type of silent, yet palpable gestures were a signature of Patricia Rooney. In fact, I’m sure they are, because his story prompted me to remember one of my own.

It was an early fall evening. The year was either 1990. The scene was the campus of Loyola Maryland, on the service road between Wynnewood Towers and the Garden (aka the Garbage) Café. 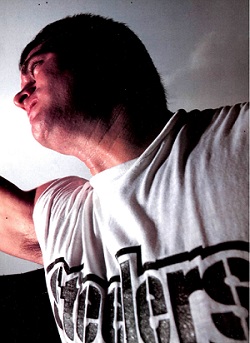 There someone walked toward the main campus with a white T-Shirt with the word “Steelers” stenciled on the front. On the eve of the 1989 Steelers storybook season, I’d seen Bubby Brister wearing this shirt in a full-page photo in Sports Illustrated’s story,”Soaring into the 90’s.”

Except I couldn’t find it. By 1990, the Steelers status as a “national” team had faded, and outside Pittsburgh quality apparel was sparse. Ordering on-line was still a half a decade away. So I asked him:

The guy’s name was Justin, and if I’m not mistaken, Justin was from a prominent Pittsburgh family. And those shirts were hard to find. I didn’t get mine until I made a pilgrimage to Station Square while in Pittsburgh on a Christmas visit years later.

It would be poetic to describe how a deep friendship between Justin and myself blossomed from this brief interaction. But poetry and accuracy don’t align here. Justin and I shared the same major, chatted about the Steelers occasionally, gossiped about classmates but “friendly” best describes our relationship.

But Justin was friends with another Loyola Steelers fan named Mike. And after leaving Loyola, Mike and I did become close friends. And at some point, Mike and I realized that Justin was a mutual acquaintance. Justin had a very distinctive way of speaking, and always seemed to be at least half an era behind when it came to remembering the names of Steelers players.

That quirk of his provided levity that offset difficult moments during games in the 1990’s, as one of us would imitate Justin’s voice saying, “John Stallworth was wide open, how could Joe Gililam miss him?” when really it had been Yancey Thigpen and Kordell Stewart. (And lest you think that Justin’s memory lapses were rooted in racial insensitivity, Mike Tomczak certainly would have become “Cliff Stoudt” and I imagine that to this day Justin still refers to Tommy Maddox as “that USFL quarterback.”)

My friendship with Mike went far beyond and dove much deeper than quipping about our mutual friend Justin. But those quips did bring us occasional amusement.

Amusement that we very well might never have enjoyed, had Patricia Rooney not given Justin a T-Shirt.