Ever see the 2006 movie Mark Wahlberg Invincible about the Philadelphia Eagles Vince Papale who transformed himself from NFL walk on into a 3 year stint as a special teamer?

Never let it be said that Pittsburgh will be outdone by Philadelphia, because Steelers tackle Alejandro Villanueva is worthy of his own movie.

Villanueva, a Spanish national, played his college ball at Army and served several tours of duty as an Army Ranger. After failing to make it in the NFL as both a tight end — his college position–and a defensive lineman, Villanueva transitioned over to the offensive line and eventually became a Pro Bowler for the Steelers at the left tackle position.

Villaneuva is not only a true hero but a great example that you can accomplish just about anything in life if you put your mind to it. However, even great stories have a final chapter. With the Steelers looking to overhaul their once-dominant offensive line, has Villanueva’s final chapter in Pittsburgh already been written? 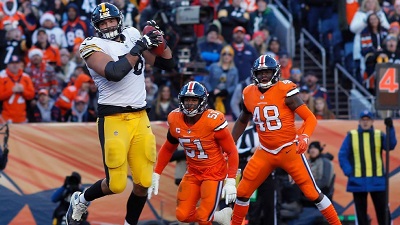 Capsule Profile of Alejandro Villanueva’s Career with the Steelers

An undrafted free agent out of Army in 2010, Villanueva tried to latch on with both the Bengals and Eagles while also fulfilling his military obligations as an Army Ranger and serving multiple tours of duty in Afghanistan.

Pittsburgh signed Villanueva in 2014 and quickly converted him from a defensive lineman into an offensive tackle. Villanueva honed his skills under the watchful eye of legendary offensive line coach Mike Munchak and ultimately became the Steelers’ starting left tackle in 2015. Villanueva has been a fixture at the position ever since and has started a total of 90 games. But Villanueva didn’t just become a starter. He was named to the Pro Bowl in both 2017 and 2018.

Alejandro Villanueva even caught a 2 point conversion pass on a fake field goal in the Steelers 2018 loss to the Broncos.

The Case for the Steelers Resigning Alejandro Villanueva in 2021

Villanueva is a popular player with both his teammates and the fans. More importantly, his durability at the left tackle spot cannot be understated — he’s started 80-straight games. Furthermore, he plays perhaps the most important position along the offensive line and is entrusted with protecting quarterback Ben Roethlisberger’s blindside.

The Case Against the Steelers Resigning Alejandro Villanueva

While Villanueva’s career hasn’t been a long one due to his military service and many years transitioning himself into a left tackle, he’ll still be 33 years old in September. More critically, it appeared that his play started to decline in recent years and elite pass-rushers such as Myles Garrett began to have their way with him.

Besides, Villanueva’s last contract included base salaries of $5 million each of the past two seasons. Do the Steelers want to give him a similar deal even for another year or two, especially when it appears they have cheaper and younger alternatives?

Curtain’s Call on the Steelers and Alejandro Villanueva in 2021

Alejandro Villanueva should be proud of his story and his career with the Steelers, but that doesn’t mean he should still be their starting left tackle in 2021. If the Steelers 2020 season proved anything, it is that the decline of the once proud offensive line that started in 2019 wasn’t just a one-year fluke.

The first step to reversing that decline is to start to get younger, and you don’t do that by resigning 33 year old veterans whose play appears to be slipping. Alejandro Villanueva’s career is worthy of its own movie. Who knows, maybe some day Thomas Tull will get back into the cinema business and film it some day.

But now is the time for the Steelers to figuratively shake Villanueva’s hand and say, “Adios Alejandro, muchas gracias para todo.”