In season trades once were like unicorn sightings for the Pittsburgh Steelers. They just didn’t happen. Then came Levi Brown in 2013. Well sort of, because Brown got injured in warm ups and never played a down. This was followed by Minkah Fitzpatrick and Nick Vannett.

The trend continued in 2020, when injuries cost the Steelers the services of Devin Bush, prompting Kevin Colbert to send a 5th round pick to the New York Jets to acquired the services of Avery Williamson. Colbert was taking out an insurance policy, an insurance policy he would cash by December as injuries forced Williamson into the lineup. Did Williamson do enough to punch his return ticket to Pittsburgh? Let’s find out. 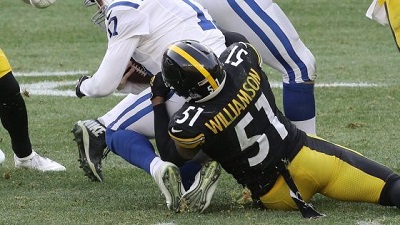 Capsule Profile of Avery Williamson’s Career with the Steelers

Avery Williamson was a fifth-round pick by the Titans in the 2014 NFL Draft and became a starter at inside linebacker almost immediately. After recording 376 tackles in four seasons, Williamson hit the free-agent market in 2018 and signed with the Jets. Williamson remained with the struggling franchise for two-plus seasons before Pittsburgh came calling last year. Thanks in part to a season-ending ACL tear suffered by Devin Bush, the Steelers traded a fifth-round pick to New York last November in exchange for Williamson’s services. Williamson started four games for the Steelers near the end of the season while filling in for both Bush and Robert Spillane.

The Case for the Steelers Resigning Avery Williamson in 2021

He’s a veteran presence and a good leader and locker room guy. He’s also been a consistent starter for the vast majority of his career, and there’s something to be said for that kind of durability in the NFL.

The Case Against the Steelers Resigning Avery Williamson in 2021

There’s really nothing that wows you about Williamson’s game, which may be okay depending on his salary demands. Having been in the league for quite a bit, Williamson, 28, is an unrestricted free agent. The last contract he signed with New York totaled $22.5 million for three years.

He’s obviously not going to get that kind of money at this stage of his career, but it’s doubtful the cap-strapped Steelers — a team that may have to move on from several of its own homegrown players — will want to pay a veteran like Williamson even a fraction of that.

Curtain’s Call on the Steelers and Avery Williamson in 2021

With Robert Spillane, a relative unknown well into the 2020 season, stepping up and performing rather well in Bush’s absence, it looks like he’s created an opportunity for himself in 2021. If Bush is back at 100 percent, the Steelers will need a thumper like Vince Williams to play alongside him.

With the Steelers’ financial situation so uncertain, that doesn’t seem likely, meaning Williams could be a cap casualty. If Williams, a long-time fixture in Pittsburgh, winds up a cap casualty with one year to go on his contract, there’s no chance that Williamson will return.