Webster’s on-line dictionary defines “Pincer” this way: “A military attack by two coordinated forces that close in on an enemy position from different directions.”

Military analogies to football often get over done, but words like “bomb,” “blitz,” “sack,” and “shotgun” describe some of its most dramatic plays. “Pincer Movement” isn’t one of those words, but it does describe the Steelers defense when its been at its best:

In 2020, it became unmistakably clear that Bud Dupree delivered the Steelers defense ½ of what they need to put opposing quarterbacks in a “Pincer Movement.” As free agency looms, the question remains, “Will Bud Dupree continue to do that in Pittsburgh, or will he do it for somewhere else?” 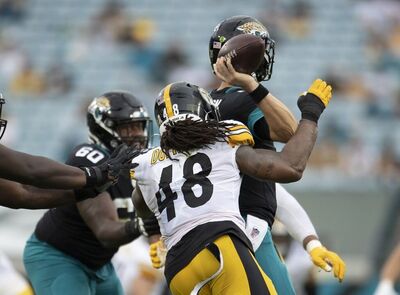 The Steelers drafted Bud Dupree in the 1st round of the 2015 NFL Draft as a proverbial project. The initial returns were encouraging. 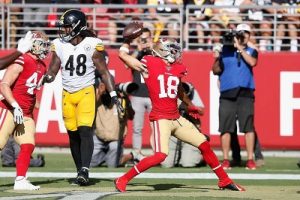 Big things were expected of Bud heading into the 2017 season, particularly given the arrival of T.J. Watt. But instead of progressing, Bud Dupree plateaued. He only logged 6 sacks in 2017, despite playing 16 games. The Steelers flipped Bud Dupree and T.J. Watt before the 2018 season.

Moreover, reports that, “Dupree’s sack total might be low, but he’s excelling in pass coverage” started to circulate, just as similar reports of Jarvis Jones’ ability against the run had surfaced when he struggled to pressure the passer.

Under Keith Butler’s tutelage, Bud Dupree’s careear has taken off. In 2019 Bud Dupree logged 11.5 sacks and just as importantly, he force 4 fumbles. He continued in 2020, logging 8 sacks on the year and was going strong all the way up until he tore his ACL in the home game against the Ravens.

For all of the sound and fury generated by Ben Roethlisberger’s struggle’s with the long ball and the absence of a running game, it should be noted that the 2020 Pittsburgh Steelers remained undefeated until they lost Bud Dupree.

The Case for the Steelers Resigning Bud Dupree in 2021

It took a decade following Super Bowl XLV, but the Steelers defense returned to dominance in 2019, as the unit carried a team with an offense forced to start its 4th string quarterback to an 8-8 record.

For the first time since losing LaMarr Woodley in the 2011 win over the Patriots, the Steelers defense finally had two dominate outside linebackers. With that in mind, resigning Bud Dupree is a no brainer.

Alex Highsmith showed flashes in 2020, but when asked to assume the starting role he floundered. If the Steelers are serious about fielding a dominating defense in 2021, they need Bud Dupree. Period.

The Case Against the Steelers Resigning Bud Dupree in 2021

X’s and O’s might spell out one type of reality, but the hard math of salary cap calculations tell a very different story. The Steelers might not be facing salary cap Armageddon anymore, but they are facing salary cap Purgatory. Under normal circumstances, the Steelers could probably manage to sign Bud Dupree to a long-term contract, just as they once inked Troy Polamalu, James Harrison and LaMarr Woodley to long term deals.

Second contracts for top outside linebackers start at about 15 million per year, and trend to 20 million. The Steelers are at least 20 million over the projected 2021 salary cap. And if Bud Dupree is one of the best outside linebackers in the game today, T.J. Watt and Minkah Fitzpatrick have flashed generational level play making talent.

The fact is, the Pittsburgh Steelers cannot afford to bring Bud Dupree back in 2021.

The only true “X Factor” in equation outlined above is Bud Dupree’s ACL tear. It is possible that teams might shy away from giving Bud Dupree big payday because of it.

It is also an unlikely scenario.

Sports medicine has evolved tremendously when it comes to ACL tears and players routinely rebound from them in a full off season, which is what Dupree will have to rehab. The Curtain’s call on the Steelers and Bud Dupree is to expect him to finish his career outside of Pittsburgh.