The “story” on the Pittsburgh Steelers since they lost to the Green Bay Packers in Super Bowl XLV has been, “Can Kevin Colbert and Mike Tomlin rebuild the defense while Ben Roethlisberger remains in his prime?”

Keenan Lewis developed slowly and by the time he got good, he was gone. The Steelers thought they had “the answer” in Cortez Allen, until injuries and mystery conspired to sabotage his career. Joe Haden‘s arrival in 2017 changed things at cornerback for the better, but then fate dealt a mortal blow to the Steelers defensive rebuild:  Ryan Shazier suffered a career ending injury.

But on of the unmentioned ironies accompanying Ryan Shazier’s tragic injury is that the night also marked the NFL debut of another promising cornerback for Pittsburgh, Cam Sutton who is in the spot light today. 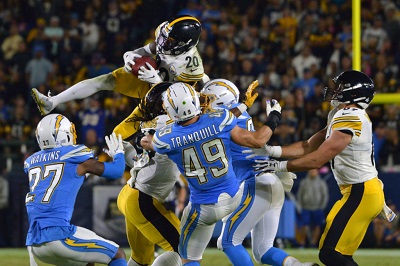 As part of such a high-profile Steelers 2017 draft class that included T.J. Watt, JuJu Smith-Schuster and James Conner, Cam Sutton, a third-round pick out of Tennessee, was a bit of a forgot man, even if he did play a position — cornerback — that was still considered to be problematic for Pittsburgh.

Perhaps it would have been different had the Steelers not signed Joe Haden that summer. Furthermore, Mike Hilton, an undrafted free agent out of Ole Miss, came out of nowhere that same year and took the Steelers secondary by storm as a very productive slot corner. Sutton spent his first few seasons increasing his position flexibility at the corner position, the slot corner position and even at safety.

However, it was in 2020 that Sutton finally had a bit of a breakthrough, appearing in 16 games and starting six at cornerback. Sutton recorded one interception, eight passes defended and 30 tackles a season ago. That he did this in the final year of his rookie deal certainly makes him much more attractive in free agency.

The Case for the Steelers Resigning Cam Sutton in 2021

Again, Sutton has position flexibility, something that has always been a valuable commodity to head coach Mike Tomlin. Of course, the position the Steelers would likely need Sutton to fill in 2021 is slot corner, and that is because it seems highly unlikely that they’ll be able to retain the services of Hilton, who is considered one of the best in the business.

Mike Hilton is going to command big money on the open market. Sutton will certainly get a raise, but if the Steelers can retain him at a reasonable price, he could fill a huge void in 2021.

The Case Against the Steelers Resigning Cam Sutton in 2021

Honestly, the only negative would be the fact that Sutton put himself on the map in 2020 and could really cash in on the open market. Life is all about timing, and if some team presents Cam Sutton with an offer that he simply can’t refuse, the Steelers probably wouldn’t have the cap space to compete.

I think the Steelers should do whatever they can within reason to retain Sutton. They spent years trying to rebuild their secondary, and I can’t imagine how much weaker it could be if their top two slot corners from a year ago exited via free agency.