The “Hometown Hero” and the “Underdog” are two staples of the modern sports narrative. Even though you’ve seen it multiple times, who can resist stopping and watching Hooisers when you spy Gene Hackman’s mug while sapping?

The Pittsburgh Steelers got a two-for-one deal worthy of Giant Eagle when they brought James Conner into the fold back in 2017. Conner is from Western Pennsylvania, he played his college ball at Pitt where he had twin, 1000 yard seasons and scored 52 touchdowns despite battling an ACL tear.

Now after four years as a Pittsburgh Steeler, James Conner is about to become an unrestricted free agent. Will we see him in Black and Gold again? Let’s take a look. 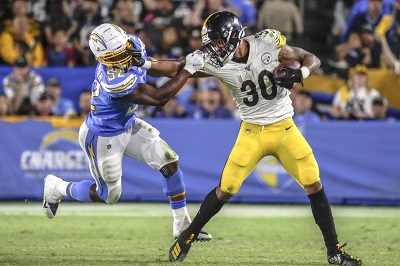 Capsule Profile of James Conner’s Career with the Steelers 2021

The Steelers made James Conner third-round pick out of Pitt in the 2017 NFL Draft. Conner was mostly a special teams contributor in his rookie season, as the running back reps behind then superstar Le’Veon Bell were few and far between.

Le’Veon Bell‘s 2018 hold out paved the way for Conner to have a breakout sophomore season. As the starter, Conner appeared to pick up right where Bell left off and was on pace to tally 2,000 yards from scrimmage. Unfortunately for Conner, the injury bug bit him again late in the year and he wound up with 973 rushing yards to go along with 497 through the air, numbers that were still good enough to win him a trip to the Pro Bowl.

Injuries proved to be troublesome for Conner again in 2019, as he missed six games with various ailments and only rushed for 464 yards. Conner appeared to return to his 2018 form at the beginning of 2020 while getting off to a hot start. Unfortunately, the ground game fizzled behind a struggling offensive line and a quarterback and coordinator perhaps too stubborn to commit to it.

The Case for the Steelers Resigning James Conner in 2021

Talent has never been an issue for James Conner. He has it and can be a productive running back when healthy. He’s a much better athlete than people give him credit for and probably the only running back currently on the Steelers roster capable of being the type of weapon Le’Veon Bell was in his prime.

The Case Against the Steelers Resigning James Conner 2021

The key phrase in the previous paragraph is “when healthy.”

That’s always been an issue for James Conner, who also suffered a torn ACL in college. The shelf life for most running backs is pretty short to begin with. Do the Steelers really want to give Conner a raise in free agency if they can’t really trust that he’ll be healthy enough to play a full 16 game season, let alone fulfill his new deal?

Curtain’s Call on the Steelers and James Conner in 2021

As a college hero who battled and defeated cancer while attending the University of Pittsburgh, Conner’s story is a great and inspirational one. He’s not a hometown hero strictly speaking, having grown up in Erie, Pa, but I think the native Pittsburghers now consider him one of their own.

Expect that to happen.