There’s no question that outside linebacker is a source of concern for the Steelers as they approach free agency. With Bud Dupree almost surely out the door the second the NFL’s new calendar year begins, Alex Highsmith, last year’s third-round pick, will get the first crack at filling the void as the starter opposite T.J. Watt.

Can it come from a player like Jayrone Elliott, the proverbial journeyman who hasn’t really made much noise along his NFL journey with various teams? We’re about to find out. 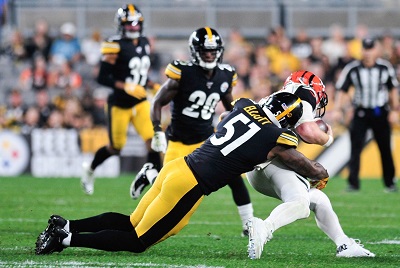 Capsule Profile of Jayrone Elliott’s Career with the Steelers

Jayrone Elliott was an undrafted free agent out of Toledo in 2014 and spent his first three years with the Packers. After a season with the Cowboys in 2017, Elliott pinballed around the NFL for a bit before winding up with the Steelers in 2019. Since then, Elliott has bounced between the Steelers practice squad and their active roster and is now a free agent. In 52 games over a six-year career, Elliott has zero starts and has recorded only five sacks.

The Case for the Steelers Resigning Jayrone Elliott in 2021

Elliott has obviously been in the NFL for a while. He won’t be expensive to resign, and it wouldn’t hurt to have a veteran around to provide depth at the outside linebacker spot.

The Case Against the Steelers Resigning Jayrone Elliott in 2021

You can take some of the positives I just used to describe Elliott and spin them into negatives. Elliott has spent six years in the NFL and has barely even made a mark. Besides, he’s 29 years old, and if he hasn’t progressed at this stage of his career, he’s likely never going to.

Curtain’s Call on the Steelers and Jayrone Elliott in 2021

There are plenty of young and eager outside linebackers out there, either still in college or currently floating around the NFL, who would love to come to the Steelers and develop and hone their skills at the outside linebacker position.

I think Pittsburgh would be better off encouraging Jayrone Elliott to get on with his life’s work.