Since the arrival of free agency to the NFL in 1993, the Pittsburgh Steelers have given second contracts to just two wide receivers: Hines Ward and Antonio Brown.

When the Steelers brought JuJu Smith-Schuster to Pittsburgh, they already had Antonio Brown locked down to a long-term contract, and with questions about some of their other wide outs, they hoped they were drafting the next Hines Ward. JuJu Smith-Schuster has filled that role, in many respects. But has he done enough to earn a second contract? Today we find out. 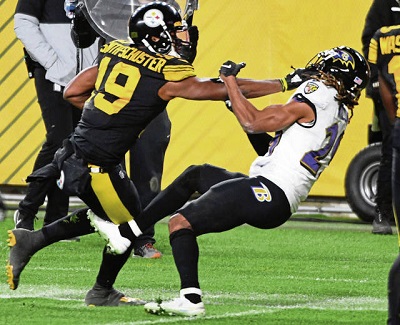 Capsule Profile of JuJu Smith-Schuster’s Career with the Steelers

When the Steelers drafted JuJu Smith-Schuster in the 2nd round of the 2017 NFL Draft a Twitter spat started between Martavis Bryant and Sammie Coates over who JuJu was coming to replace. As it turns out, he replaced both of them. 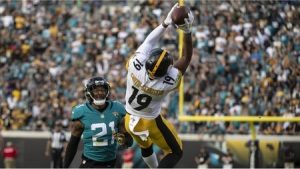 During his first season he caught 58 of 79 passes thrown his way for 917 yards, including a 97 yarder against the Lions and a critical 69 yarder that set up the infamous Jesse James play in the loss to the Patriots at Heinz Field. Ju-Ju Smith Schuster followed that up with a 111 catch, 1426 yard, 7 touchdown sophomore season that included another 97 yard touchdown pass.

However, with Ben Roethlisberger injured, an absent running game, inconsistency efforts by Mason Rudolph and Devlin Hodges and his own injuries, JuJu Smith-Schuster struggled in 2019 catching just 42 passes for 552 yards.

JuJu bounced back in 2020, recording 97 catches. Critics might charge that his “Yards per catch” dropped. It did. That’s because JuJu Smith-Schuster became the go-to man when touch catches were called for.

The Case for the Steelers Resigning JuJu Smith-Schuster in 2021

With all of those accolades, you’d think that the Steelers would have inked JuJu Smith-Schuster to a new deal a long time ago. JuJu wants to stay in Pittsburgh. Ben Roethlisberger would like him back. There’s a reason why JuJu Smith-Schuster’s catch percentage was 15 points higher than that of Chase Claypool, Diontae Johnson, Eric Ebron or James Washington:

JuJu Smith-Schuster was a men among boys. He put his heart and soul into the game. When others dropped passes, JuJu pulled them down. JuJu was physical. He yielded no quarter to any other player on the field.

You win championships with players like JuJu Smith-Schuster. If the Steelers are serious about making a final run at Lombardi number 7 with Roethlisberger, then they must keep JuJu in Pittsburgh. 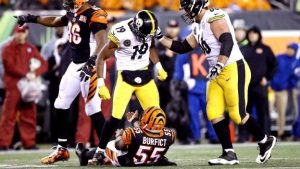 The Case Against the Steelers Resigning JuJu Smith-Schuster in 2021

Ah. If only it were about the X’s and O’s. Alas, It is not. A quick look at Over the Cap reveals that a wide receiver of JuJu’s pedigree could easily make 15 to 16 million per year. The Steelers have, at best 3 million under the cap.

Sure, they could free 16 million for JuJu. And JuJu wants to stay in Pittsburgh. Perhaps he’ll give “home town discount.” The stars seem aligned.

You really think JuJu Smith-Schuster is going to leave 30 or 35 million dollars guaranteed on the table to sign a one year “prove it” contract ? In a perfect world, JuJu Smith-Schuster would be a Steeler for life. But the world is far from perfect, and if JuJu has shown he’s a good, a very good wide receiver, he’s not yet shown he’s a great receiver and hence not deserving of a second contract from the Steelers.

This one hurts. A lot. Because absent some injuries and other personnel issues, JuJu Smith-Schuster should have, could have likely would have played a key role in bring home Lombardi Number 7 during his time in Pittsburgh.

Although in a normal year, that money likely goes to Bud Dupree first. And there’s a simple reason why, as former Steelers scribe and Current USA Today Wire Editor Neal Coolong explains:

It's not a ploy or a trick. The #Steelers aren't going to negotiate w Juju because he's earned more than they're willing to pay. When you can identify, draft and develop Chase Claypool in the same round you drafted Juju in 4 years prior, you're not gonna pay Juju $15M a year.

This, in a nutshell is why the Steelers so seldom give 2nd contracts to wide receivers. Does JuJu Smith-Schuster , like Hines Ward and Antonio Brown, bring intangibles to the table that statistics fail to capture? Absolutely. But, Ward had a Hall of Fame worth career and Antonio Brown had GOAT like talent.

JuJu Smith-Schuster hasn’t shown he’s in that level yet, and that’s why the Curtain’s Call is that he’ll find his fortune outside the Steel City.