On March 5th,2018 Steel City Insider’s Jim Wexell made it his mission to “Bring back Marcus Allen.”

Ah, yes, of course Wexell was trying to unmake the Steelers status as victims of circumstance when they missed on drafting USC’s Marcus Allen by two slots in the 1982 NFL Draft and instead had to settle for Baylor’s Walter Abercrombie. Right?

Wexell was doing a pre-draft profile on the a multi-talented Penn State safety named Marcus Allen, whom he thought would be a good fit for the Steelers. Pittsburgh indeed drafted Marcus Allen, who is now and Exclusive Rights free agent, and today we look at his future. 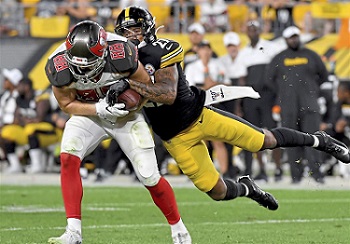 Capsule Profile of Marcus Allen Career with the Steelers

The Steelers indeed drafted Marcus Allen in the 5th round of the 2018 NFL Draft. And the truth is that the notebook on him remained pretty thin for his first two years. He made the final roster but only saw appearances in two games, logging a total of 20 plays, and giving up completions on two of 3 passes he was charged with covering.

Allen failed to make the final roster in 2019, but returned to the practice squad, getting activated for 1 game where he played on special teams. In 2020, the Steelers moved him from safety to inside linebacker. This allowed him to get in on a full 20% of the defensive snaps, thanks to injuries to Devin Bush, Robert Spillane and Vince Williams.

He struggled against the run, and still gave up 8 of 10 passes that he was charged with covering. It would be unfair to scapegoat Allen for the defensive disaster that was the loss to the Bengals, but he certainly contributed.

The Case for the Steelers Resigning Marcus Allen in 2021

The truth is that the Steelers neither have depth at inside linebacker nor do they have it at safety and the team clearly is looking to transition to hybrid linebacker-safety type players. (See Morgan Burnett’s displeasure at having to play such a role.)

As an exclusive rights free agent, the Steelers can have Marcus Allen back at essentially the same salary cap charge as an undrafted rookie free agent. Allen also is experienced on special teams.

Who would you rather have as a role player at inside linebacker, safety and special teams? A guy with 3 years of experience under his belt or an inexperienced rookie?

The Case Against the Steelers Resigning Marcus Allen in 2021

The Steelers have seen Marcus Allen for 3 years at multiple positions and he’s not delivered much at either. In fact, it took injuries to both starting inside linebackers AND the number one backup to get Marcus Allen his first sustained snaps with the defense, and opposing offensive coordinators were only too happy to oblige.

The Steelers have seen enough to know there’s nothing to indicate that Marcus Allen is the next Lee Flowers – another 5th round Safety who sat on the bench in obscurity for 2-3 years before emerging as a serviceable starter.

Expect this one to be a non-event. The Steelers will give Marcus Allen and exclusive rights free agent tender and allow draft picks and/or rookie free agents to push him during training camp and, assuming it is played, preseason. This is a no-risk move for the Steelers.