Undrafted Rookie Free Agents have been the secret to Kevin Colbert’s success. OK, his record of only wiffing on two first round draft picks (Jarvis Jones and Artie Burns) since returning to Pittsburgh has had a big role in his success.

But he fits the prototype pretty well, has started for 4 straight seasons making himself as an impact player and he’s now a free agent. Will he stay in Pittsburgh long enough to make a run at a ring? Let’s find out. 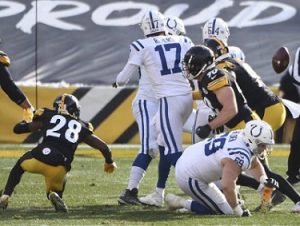 Jacksonville signed then cut Mike Hilton as an undrafted rookie free agent in 2016. The Patriots swooped in and added him to their practice squad, but Hilton’s stay in Beantown lasted all of one week. Mike Hilton held a pink slip in his hand for most of the rest of the season, until Pittsburgh signed him to the practice squad in December 2016.

Hilton was the St. Vincents sensation during the summer of 2017, a feat which landed him both a roster spot and a gig as the Steelers starting slot corner. As a rookie Mike Hilton made two interceptions, knocked away six passes, while flying in under the radar for four quarterback sacks.

The sack sagged a bit in 2018 and 2019, but Hilton’s consistent play has continued for a Steelers secondary that has gone from a team weakness to a strength with him a part of the lineup. In 2020, Mike Hilton posted what might have been his best season, pulling down 3 interceptions, sacking opposing quarterback 3 times and registering 8 tackles behind the line of scrimmage.

And he did this while splitting time with Cameron Sutton.

The Case for the Steelers Resigning Mike Hilton in 2021

NFL teams must have 3 competent cornerbacks. A starter-caliber nickle back is no longer a “Nice to have.” Mike Hilton has fulfilled that role for 4 years, and has delivered excellence to the position. He’s been durable playing in 59 games in four years, and at age 27 still has many years of his prime ahead of him.

You can see it in his high sack total and impressive tackles for loss numbers, you can also see it in the photo above, T.J. Watt is the one making the strip-sack of Philip Rivers, but Hilton is right there in the frame.

Really, the only question is why haven’t the Steelers already locked Mike Hilton up to a long term contract?

The Case Against the Steelers Resigning Mike Hilton in 2021

Mike Hilton had a great year in 2020, and he did it while splitting time with Cam Sutton.

There’s a reason for that, and that’s because Cam Sutton is a better coverage cornerback than Mike Hilton is. Cam Sutton might not be as good at pressuring the passer as Mike Hilton nor can he create mischief behind the line of scrimmage, but Sutton can do something that Mike Hilton hasn’t done and probably never will:

Joe Haden will be 32 next season. If there’s one position where players tend to “get old fast” in the NFL, it is at cornerback. All signs indicate that Joe Haden will be back in 2021, but then what? Justin Layne certainly hasn’t shown he’s the answer there. Cam Sutton has shown that he might be.

The Steelers quite simply cannot sign both Cam Sutton AND Mike Hilton, and given a choice between the two, they should opt for Sutton.

Curtain’s Call on the Steelers and Mike Hilton in 2021

Mike Hilton has been a tremendous player for the Steelers and is yet another feather in Kevin Colbert’s cap. Perhaps under a normal year, the Steelers could afford to bring him back and Cam Sutton.

There’s no way they can sign both Cam Sutton and Mike Hilton and they probably won’t even try. Expect Mike Hilton to find his fortune outside of Pittsburgh.