The digital era has changed the way the NFL presents its product. By in large, those changes have been for the better, bringing fans closer to the game they love. Preseason football has not aged well in the digital transition.

Football starved fans who’d been suffering a long off season could finally get their fill of gridiron action. It was enough, even if it didn’t feature top talent (although starters did get a fair number of preseason snaps well into the 1990s). Today, YouTube, Twitter and Tiki Toki fill that void from February to August. Preseason football is now perceived as a painstaking rite to be endured, rather than a welcome appetizer that precedes the main course.

Ola Adeniyi was another no pedigree preseason standout in 2018 and is now a restricted free agent. Has he done enough to earn him that coveted “second NFL contract?” Let’s find out! 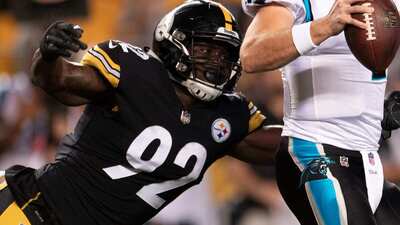 Ola Adeniyi closes in for one of his patented preseason sacks. Photo Credit: Karl Roser, Steelers.com

Capsule Profile of Ola Adeniyi’s Career with the Steelers

An undrafted free agent out of Toledo in 2018, Ola Adeniyi quickly made a name for himself when he recorded several sacks that preseason. While Adeniyi did make the Steelers roster during his rookie campaign, he was unable to capitalize on his preseason success thanks to an injury that forced him onto the Injured Reserve list for the majority of the season.

Adeniyi made the Steelers roster in 2019 and again in 2020, but the outside linebacker was afforded very few defensive snaps playing behind the dynamic pass-rushing duo of T.J. Watt and Bud Dupree. Adeniyi’s primary role during his Steelers career has been on special teams.

The Case for the Steelers Resigning Ola Adeniyi in 2021

Adeniyi is a restricted free agent but one without much of a resume. It should be fairly easy and inexpensive to retain his rights for at least one more season. Besides, with Bud Dupree likely gone in free agency, the Steelers depth at outside linebacker will be a primary concern heading into 2021. It appears that the Steelers may have found themselves a suitable replacement for Dupree in one Alex Highsmith, a third-round pick in 2020. However, Adeniyi, 23, is still really young and perhaps has room to grow as a player. He knows the system and, again, is a major contributor on special teams.

The Case Against the Steelers Resigning Ola Adeniyi in 2021

The Steelers coaches know more than we do. While Adeniyi’s rookie preseason was eye-opening, it did primarily come against players of his level. Perhaps the coaches realized this right away, which is why they really haven’t given Adeniyi much of a chance to be a major player on defense.

Curtain’s Call on the Steelers and Ola Adeniyi

Again, it should be fairly inexpensive to retain Ola Adeniyi’s services. I see no real problem in him remaining on the Steelers roster in 2021. If he does still have some upside, maybe someone like Highsmith won’t be able to block it as easily as Dupree did.

With that said, Ola Adeniyi is a restricted free agent, and restricted free agent tenders will clock in at around 2.3 million dollars. The Steelers need every salary cap penny they can get, and could very well opt not to tender Adeniyi yet still bring him back at a veteran minimum.