Return specialists have never been the franchise’s hallmark. Louis Lipps dominated as a rookie but that was about it. Rod Woodson was devastating as a return man when he was young but was merely “good” as the 80’s faded into the 90’s.

Ray-Ray McCloud added some dynamism to the Steelers return game early in 2020. Does this Steelers restricted free agent deserve a shot at recapturing this in 2021? Let’s find out. 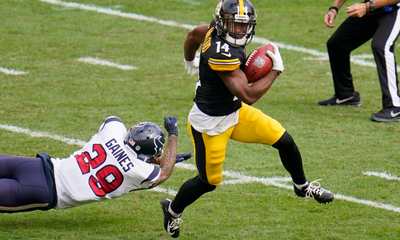 Ray-Ray McCloud, a sixth-round pick by the Bills in the 2018 NFL Draft, spent a season in Buffalo before being waived at the end of the following season’s training camp. After a brief stint with the Panthers and again with the Bills, McCloud was signed by the Steelers last August.

Ray-Ray McCloud was brought to Pittsburgh to be a return specialist and filled that role quite well in 2020. McCloud averaged just over 23 yards on kickoff returns, but it was his punt-return prowess that showed the Steelers that they may have found a true replacement for the dynamic Antonio Brown. McCloud tallied 298 yards on 29 punt returns–including one for 57 yards. Ray-Ray McCloud was a bit of a fifth wheel as a receiver, posting just 77 yards on 20 receptions.

The Steelers should be able to retain McCloud’s services rather cheaply, and he could be quite the bargain if he continues to show promise as a return specialist. Furthermore, there could be room in the Steelers’ offense for McCloud, considering JuJu Smith-Schuster is all but gone. McCloud showed some flashes when he was featured in Matt Canada’s motion offense in 2020. Now that Canada has been promoted from quarterbacks coach to offensive coordinator, perhaps he will find a way to flesh out McCloud’s potential.

Ray-Ray McCloud is a restricted free agent, so unless some team comes calling with the offer sheet of his dreams that Pittsburgh simply couldn’t match, I don’t see any negatives in bringing McCloud back, other than some character issue that has yet to be disclosed. The Steelers could tender McCloud or they could even bypass that option and with little risk and resign him as an unrestricted free agent.

Ray-Ray McCloud is young (24), he’s a restricted free agent, he can be retained on the cheap and he has potential to be a dynamic return specialist. Oh yeah, there could be an opening in the Steelers receivers room. I see no downside in bringing back Ray-Ray McCloud. Expect the Steelers to bring him back, albeit without offering him a restricted free agent tender, due to salary cap restrictions.