Free Agency has yet to officially start but with the official negotiating period already underway, things are already beginning to happen for the Steelers.

Cam Sutton joined the Steelers as a 3rd round draft pick in the 2017 NFL Draft. Sutton began the year on injured reserve but was pressed into action in the Steelers road win over the Cincinnati Bengals, which coincidentally was that same night Ryan Shazier suffered his career ending injury. 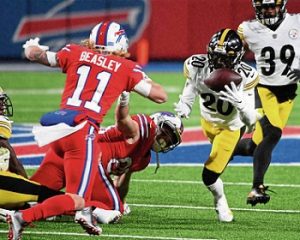 Sutton played in each of the rest of the Steelers games in 2017, and saw his playing time increase in the coming year where he logged 46% of the defensive snaps, working in behind starters Steven Nelson, Joe Haden and Mike Hilton.

During 2020, Cam Sutton intercepted one pass, defensed eight more passes, forced 3 fumbles and recovered one of those. Per Joe Rutter of the Pittsburgh Tribune-Review, Sutton logged a career-high 53% of all defensive snaps. Of the Steelers “signable” free agents, keeping Cam Sutton in Pittsburgh was clearly their biggest priority.

Arguably, the next most important signings for the Steelers would be offensive tackle Zach Banner and nose tackle Tyson Alualu.

Why Only 2 Years for Cam Sutton?

On the face of it, Cam Sutton appears to have taken a “hometown discount,” as 9 million over two years is hardly big payday for a proven NFL cornerback. Obviously, if Sutton and his agent had harder offers from outside of Pittsburgh, they wouldn’t have agreed to a deal so quickly.

A one year “prove it” deal wouldn’t have been a surprise, but a two year deal does surprise, given the the Steelers typically sign their players to 3 year second contracts. At the beginning of the off season, Mark Kaboly of The Athletic observed that Steelers most important contracts ran through 2021.

Kaboly’s conclusion was that this was where management had seen the team’s natural window of Super Bowl viability ending.

Could Cam Sutton’s two year deal indicate that the team is now projecting into 2022? At this point its far too early to to tell but it is worth keeping an eye on.

While the news that Cam Sutton would be staying in Pittsburgh was a positive and perhaps a bit surprising, several free agents announced their decisions to sign elsewhere. Bud Dupree has apparently reached a deal to play with the Tennessee Titans and Matt Feiler will join the San Diego Chargers.

JuJu Smith-Schuter has not annouced his new home, but has informed players that he will be departing, and rumors have tied Mike Hilton to Philadelphia.