My has the importance of the defensive line changed in the National Football League. Two generations ago defensive tackle Joe Greene arrived at St. Vincents and literally began pivoting Pittsburgh towards its championship arc during his very first practice.

In the 80’s, Chuck Noll thought he could repeat history and “start again on defense” by drafting Gabe Rivera. Sure, passing on Dan Marino was mindbogglingly boneheaded, but even if you set that aside, the mentality of favoring defense over a quarterback doesn’t make sense in 2021. In the dark days of 1998 and 1999, the late season declines of the Steelers defense were just as bad as the offense’s, and Joel Steed’s ailing knees were a big part of those drops.

Fast forward to 2019: Javon Hargrave, a rookie starter from the Steelers 2016 draft class, shows he’s budding into his prime and the Steelers don’t attempt to make a competitive offer to keep him. They made that move, in part, because they gambled that Tyson Alualu could provide more or less the same bag for far less salary cap buck.

The question is, will he return to Pittsburgh? 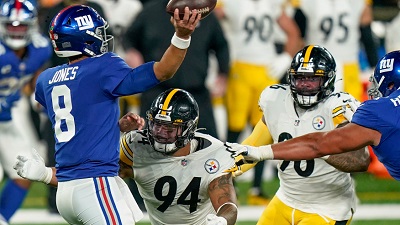 Capsule Profile of Tyson Alualu’s Career with the Steelers

Tyson Alualu was a first-round pick by the Jaguars (10th, overall) in the 2010 NFL Draft. After spending seven mostly-nondescript seasons in Jacksonville, the California product became a Steeler in 2017 after signing a two-year deal.

Tyson Alualu, who signed another two-year contract prior to the 2019 season, was brought in to provide quality depth along the defensive line, and he spent his first three seasons in Pittsburgh doing just that. However, after Javon Hargrave departed as a free agent last spring, it was as a starting nose tackle in 2020 where Alualu provided the Steelers with perhaps the highest quality play of his entire career. Alualu was so strong against the run in 2020, his absence was clearly noticeable when he missed several games due to injury.

The Case for the Steelers Resigning Tyson Alualu in 2021

The Steelers defensive line, one that was considered a major strength for years, is starting to fray, mainly due to the departure of Hargrave and the lack of proven depth. If Alualu is brought back for 2021, if nothing else, the starters–Cam Heyward, Stephon Tuitt and Alualu — should remain an incredible asset for Pittsburgh.

The Case Against the Steelers Resigning Tyson Alualu in 2021

Alualu will be 34 in May. That’s not much of a concern. What could be a concern is any higher than expected offers he receives as an unrestricted free agent. Alualu’s salary counted $3.6 million against the cap in 2020. Now that he’s a starter, he probably deserves a salary that reflects that. But it has to be within reason for the salary compromised Steelers. If not, the Steelers’ unproven depth along the defensive line may quickly become unproven potential starters.

Curtain’s Call on the Steelers and Tyson Alualu in 2021

In my opinion, Tyson Alualu was quietly one of the more critical players on the Steelers defense in 2020.

Given that, Kevin Colbert and Mike Tomlin owe it to themselves to work out a reasonable deal and keep Tyson Alualu in Pittsburgh for at least one more season.