While that reality doesn’t make center football’s 2nd most important position, in football, it does highlight the critical role it plays in the offense. With that in mind, just how big of a need is center for the Pittsburgh Steelers heading into the 2021 NFL Draft? 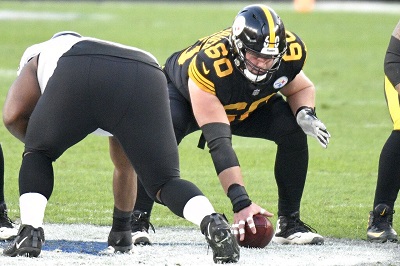 When it comes to the Steelers needs at Center in the 2021 NFL Draft the fact that Pittsburgh has no starting center tells us a lot.

While no one dispute the fact that Pouncey was the latest in a legacy of great Steelers centers, starting with Ray Mansfield, and continuing through Mike Webster, Dermontti Dawson and Jeff Hartings, the truth is that his play slipped.

High snaps bedeviled Devlin Hodges and Mason Rudolph at throughout 2019 and of course the first snap of the 2021 post season sailed high above Ben Roethlisberger’s head, and the Steelers never recovered.

But there’s mistaking the fact that the Steelers will miss Pouncey’s leadership in the locker room.

Current the Steelers have two backup centers, J.C. Hassenauer an unrestricted rookie free agent from the 2021 squad, and B.J. Finney who joined the Steelers via the practice squad in 2015, work himself into a regular roster spot in 2016 and started 13 games over the next four season.

B.J. Finney departed in free agency in 2020, but was ultimately traded by Seattle to Cincinnati, who cut him earlier this year.

At this point, both J.C. Hassnuer and B.J. Finney project more like the next Sean Mahan or the next Justin Hartwig as opposed to the next Dermontti Mansfield, the next Mike Hartings or the next Maurkice Webster. But the Steelers did win a Super Bowl with Justin Hartwig and he was seen as a strong enough player to warrant a 2nd, 4 year contract prior to the 2009 season.

The Steelers 2021 Draft Needs at Center

By bringing back B.J. Finney Kevin Colbert and Mike Tomlin brought themselves the luxury of not having to reach for a center early in the draft. This is critical.

The Steelers have too many needs in at too many other spots on the depth chart to tie their hands at center. And besides, when Colbert and Tomlin reach, Jarvis Jones and Artie Burns happen.

The Steelers don’t need to draft a center who can come in and start right away the way Pouncey did after arriving via the number 1 pick in the 2010 NFL Draft, but they do need someone who at least projects as a full-time starter from 2022 onwards.

Therefore, the Steelers need at center entering the 2021 NFL Draft should be considered as Moderate-High.