The Steelers entered 2020 in great shape at the tight end position, thanks to the free-agent signing of veteran Eric Ebron. But after the sudden retirement of Vance McDonald this offseason, what kind of shape is Pittsburgh in at tight end heading into the 2021 NFL Draft? 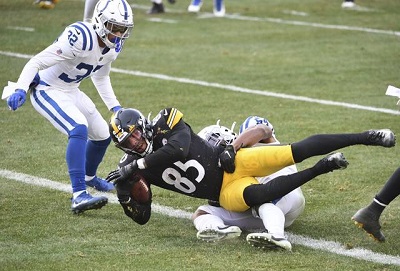 The Steelers Draft Needs at Tight End: The Starters

A number-one choice by the Lions in 2014, Ebron spent his first four seasons in Detroit before signing with the Colts as a free agent in 2018. After two years in Indianapolis, Ebron signed a two-year deal with the Steelers last March.

At 6’4″ and 253 pounds, Ebron didn’t come to Pittsburgh as a traditional Steelers tight end in the mold of a Heath Miller, but he certainly appeared to be their most explosive talent at the position since perhaps the days of Eric Green. Ebron caught 56 passes for 558 yards and five touchdowns a year ago.

However, he did have his share of drops and was one of the league leaders in that category. There was speculation early in the offseason that Ebron would be a cap casualty, but he restructured his deal and will return for 2021 as the team’s only proven commodity at the position.

The Steelers Draft Needs at Tight End: The Backups

Zach Gentry, the fifth-round pick out of Michigan in 2019 NFL Draft, has barely made a dent as an NFL player over his first two seasons. To put that in perspective, he has as many season-ending injuries as he does receptions (one). The same can be said for Kevin Rader, Charles Jones and Dax Raymond, former UDFAs who round out Pittsburgh’s tight end depth chart.

Again, Eric Ebron is the lone returning starter. And while Ebron brings his assets to the offense, particularly in the Red Zone, his blocking leaves a lot to be desired (and that’s being generous.)

With nobody even remotely ready to take McDonald’s place atop the depth chart, the tight end position is one the Steelers really need to invest in during the 2021 NFL Draft.

After Kyle Pitts, Florida’s highly-rated prospect, there doesn’t appear to be another tight end the Steelers could realistically take in the first round. But considering they didn’t address the position with even a journeyman free-agent signing, they should certainly make tight end a priority in one of the next two rounds.

No matter how you split it, the Steelers needs at tight end heading into the 2021 NFL Draft must be considered High