Tyson Alualu’s change of heart and decision to return to Pittsburgh was a welcome surprise.

He raised the average age of Steelers defensive line to 31.3 years. Defensive line is a young man’s game in the NFL, and while hitting the big 3-0 might not be the foreboding milestone it once was, you still don’t want too many people on the wrong side of that number.

The Steelers haven’t invested a premium pick on their defensive line since 2016. Youth is clearly needed. Will Pittsburgh get it in the 2021 NFL Draft? 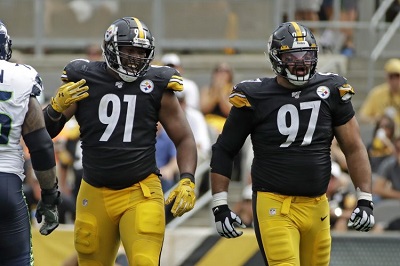 On the eve of the 2020 season the Steelers knew the COVID-19 salary cap crisis was looming. Yet that did not deter Art Rooney II from personally ensuring that Cam Heyward got his contract extended and would remain in Pittsburgh.

Cam Heyward was a workhorse for the Steelers and while his stats might have dipped a bit, he continued to make the kind of plays that don’t show up in Fantasy Football algorithms but that do help teams win games. Opposite Heyward was Stephon Tuitt, who played like a man on fire, logging 11 sacks, batting down 3 passes, forcing 2 fumbles and tackling 10 ball carriers behind the line of scrimmage.

In his first full season as a Steelers starter, Tylson Alualu’s numbers might not impress. But he clogged up the middle and was crucial in the Steelers ability to stop the run. The chinks in the Steelers defensive armor opened not when Devin Bush went down, but when Tyson Alulau got hurt against Baltimore and then missed the game in Dallas.

Behind Heyward, Tuitt and Alualu, the Steelers have veterans Chris Wormley, Isaiah Buggs, Carlos Davis and Henry Mondeaux. Wormely brings the group experience, but did little to distinguish himself in 2020 and one has to wonder if the Steelers would have resigned him had Alualu accepted their initial offer. Buggs, outside of his spectacular stop of Lamarr Jackson struggled. Mondeaux looked respectable, but saw little more than spot duty.

Carlos Davis, whom many see as a future starter at nose tackle, did little as a rookie outside of his sideline scuffle with Buggs.

The Steelers have a very strong group of starters on defensive line, but it is an aged group. They also lack a 4th lineman who can rotate in the way Alualu could when Javon Hargrave was here.

But, if their current crop of backups lacks “the wow factor,” to quote Simon Cowell, Buggs, Morndeaux and Davis all offer some legitimate “Upside.” With that said, the Steelers would do well to draft a lineman who can develop into a starter at nose tackle, if for no other reason than Alualu will be 34 on opening day.