If you’re a Steelers fan, you’re likely not all that comfortable with their activity during the first two weeks of the NFL’s unrestricted free-agency period.

But you should have known they weren’t going to do much, right? The salary-cap problems were well-documented, and, besides, the Steelers’ history of making free-agent splashes should have been another clue.

Perhaps the re-signing of Cam Sutton and the surprise re-signings of JuJu Smith-Schuster and Tyson Alualu weren’t enough. Also, the outside signings of free agents such as Joe Haeg and Miles Killebrew probably didn’t move the needle on your excitement meter.

The annual NFL Draft. I mean, my goodness, the talk about the popular event — an event whose television ratings always eclipse those of the NHL’s Stanley Cup Final — begins the second the Steelers’ season comes to an end and doesn’t stop until well-after their final pick is announced on Day 3 of draft weekend.

There are millions of NFL fans who probably love the draft more than they do an actual football game. I don’t, but I can certainly appreciate the sentiment. Why? Because the draft is the life-blood of the National Football League. It’s actually the life-blood of every professional sports league. 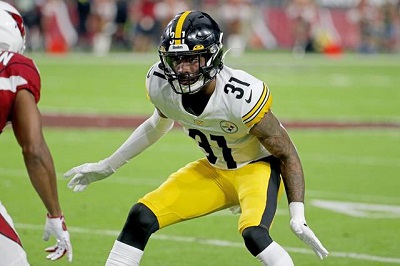 The Steelers and the NFL Draft

Every viable prospect is poked, prodded and interviewed countless times in the weeks and months leading up to the draft. There are few secrets by the time the annual event rolls around every April.

Teams are looking for players to help them win now and in the future. They’re searching for prospects that will lead them to the Promised Land–better known as the Super Bowl.

My point is, we dissect every single Steelers’ draft choice — and even the undrafted free agents — once they arrive and speculate on what they can do for the team now and in the future. Yet, the second unrestricted free agency rolls around every March, we forget about many of those players and want Pittsburgh to go shopping for shiny new toys.

Take cornerback Justin Layne, for example. The Steelers made Justin Layne a third-round draft choice out of Michigan State just two years ago. People were excited about him. Many were of the opinion that he was a great value pick and could wind up being a steal. When a player is selected in the third round, I think it’s reasonable to expect him to at least be competing for a starting job by his third season.

Here we are in 2021, and Layne is heading into his third season. I was as disappointed by the release of Steven Nelson as anyone. The Steelers obviously did this to save money, sure, but maybe Pittsburgh also cut Nelson knowing that Layne was ready to make the jump from backup to starting corner.

Another example is Chukwuma Okorafor, an offensive tackle that was selected in the third round of the 2018 NFL Draft. Okorafor has already started a number of games–including 15 last year. Heading into his fourth season, perhaps Pittsburgh is confident that he can be the long-term answer at either left or right tackle.

We really don’t know how the Steelers feel about players like Layne and Okorafor, but we might get our answer by how they address both corner and offensive tackle during the early rounds of the 2021 NFL Draft.

As for Alex Highsmith, the outside linebacker taken in the third round last year, we knew right away that the former Charlotte walk-on was selected to be the heir apparent to Bud Dupree, who had designs on making a ton of money as an unrestricted free agent–he did.

This is what the draft is for. Heck, people are tracking the Pro Day visits of head coach Mike Tomlin and general manager Kevin Colbert as if they’re foreign spies.

There’s obviously a lot of time and money that goes into the NFL and these prospects. If you can hit on a class or two, it allows you to remain competitive for years.

Take the Steelers 2017 Draft class, for example. I think T.J. Watt‘s career speaks for itself. You can argue about many aspects of Smith-Schuster’s game and non-football exploits, but you can’t say that he hasn’t been a productive NFL receiver. As for Sutton, a third-round pick from Tennessee, he may wind up being more than just the starting slot corner; he may be the number two corner.

The Steelers drafts of 2008 and 2009 produced very little in terms of long-term production (at least for the Steelers), and by the time those Super Bowl veterans from the 2000s were ready to get on with their life’s work, the cupboard was pretty bare; the Steelers didn’t miss the playoffs in both 2012 and 2013 by accident.

In conclusion, the Steelers didn’t do a whole lot in free agency, but maybe that’s because they believe in their recent draft choices.