Yesterday the Steelers made official the news that broke last week by resigning reserve quarterback Joshua Dobbs. This move follows the second signing announced last week, that saw the return of Vince Williams to Pittsburgh, just weeks after the Steelers cut him for salary cap reasons.

Taken together, the latter move shores up depth at a critical position prior to the 2021 NFL Draft while Joshua Dobbs signing sends an important message to the quarterback’s room.

And, for the second time in a month, the Steelers again show that sometimes it is best when bloggers are slow at the switch. 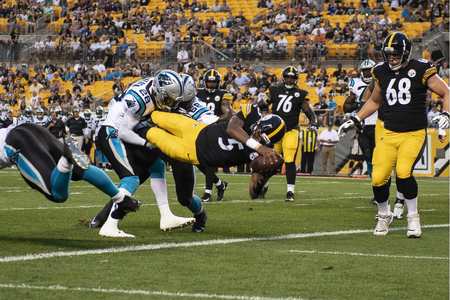 With Ben Roethlisberger returning and Mason Rudolph backing him up, why would the Steelers really need another quarterback, right?

Wrong. The Steelers like Joshua Dobbs, the quarterback who moonlights as a rocket scientist. The coaches like him and so do the players – notice Dobbs sitting with a tablet next to Ben Roethlisberger thought the 2020 season.

When the Steelers drafted Mason Rudolph in 2019, everyone assumed that Joshua Dobbs was the odd man out, going into preseason. After all, they’d sent 5 years developing Landry Jones to be a back up, and Mason Rudolph was set to learn below him.

Yet, as Joshua Dobbs was one of the players who Mike Tomlin praised for “leaning in” during the 2018 preseason finale and earned himself a roster spot.

Word is that the Steelers like Haskins talent, and they’re taking a flyer on him to see if he can match that talent with the discipline needed to succeed in the NFL. But had the Steelers followed the conventional wisdom and stood pat with their 3 quarterbacks, only adding the proverbial 4th arm, Haskins could arrive at St. Vincents in comfort.

Mike Tomlin and Kevin Colbert have served notice to Dwayne Haskins that he will have to earn is roster spot.

The Steelers don’t often cut home grown players in salary cap moves. As Steel City Insider’s Ian Whetstone has pointed out, they lead the league in fulfillment of 2nd and 3rd contracts for drafted players.

But when they do do it, there almost always the caveat: He could come back for less.

But Vince Williams did. Vince Williams took less money to stay in Pittsburgh, and that’s good for the Steelers. Its also good for this blogger, because yours truly never got around to writing an article on his departure and documenting his career as a Steeler.

The article was to be titled, “I Only Realized Vince Williams was the Steelers Linebacker I’ve Been Waiting for Until he Was Gone.” And for the second time in the off season, the last one being Tyson Alualu’s reversal and return to Pittsburgh, delays in getting “Content” published has its upsides.

Even better than that, Vince Williams still has more to add to his Steelers story.