He arrived a day (or two) later than many expected and a few fans demanded, but the Steelers drafted Dan Moore Jr., offensive tackle from Texas A&M with their first fourth round pick in the 2021 NFL Draft.

The 2021 Draft Needs Matrix rated the Steelers needs going into the draft as running back, tackle, center and tight end. Had we heeded Tony Defeo’s rating, tight end would have come in as the Steelers 2nd greatest area of need.

(Editorial note to self: Never debate the Defeoman’s logic.)

Seriously and thankfully, neither Colbert nor Tomlin has ever set eyes on this site, and Steelers fans should be thankful for that, because this scribe’s first reaction to hearing of the Ben Roethlisberger pick back in 2004 was “This is a mistake.”

Steelers offensive line coach Adrian Klemm wasted little time in doubling down on his decision to draft Don Moore declaring, “I don’t view him as a project at all. We’ll throw him into the mix as far as competing.” 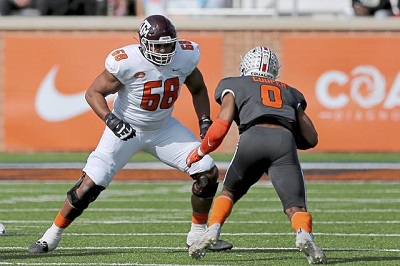 Dan Moore Jr. stands at 6’5” and weighs in at 311 pounds. Played through his senior year at Texas A&M where he made 36 straight starts starting with his sophomore year. Moore also got a start during his freshman year, although that came at guard.

Here is a look at his highlight reel:

While there might not be much precedent for the Steelers starting a fourth round rookie at tackle, at his pre-draft press conference Mike Tomlin confirmed that Chukwuma Okorafor was penciled in to start at left tackle but made no bones about how temporary that status is.

The addition of Dan Moore gives the Steelers four offensive tackles, and helps bolster an offensive line that has been seen a steep decline over the past two seasons.