As Carlos Davis and Isaiah Buggs seemed poised to tussle during the Steelers season finale against the Browns, I couldn’t help but remember the words of my former wrestling coach, Wheaton High’s legendary Dave Moquin.

It was during my Junior year, and our heavyweight and our 189er were in practice. I didn’t see what happened between the two of them, but they were staring each other down, from opposite sides of the mat.

Moquin saw them and immediately reprimanded: “IF either if you was half as tough as you’re pretending to be now, you’d both be state champions. Now get back to the mat and wrestle.”

Davis and Buggs’ sideline stare down seemed to be similarly childish. But in this case Steelers head coach doesn’t need to say anything like that, because his actions speak louder than words.

The Pittsburgh Steelers didn’t have a 5th round pick of their own in the 2021 NFL Draft but traded their 2022 4th round pick to the Miami Dolphins to move into the 5th to draft Wisconsin’s defensive end Isaiahh Loudermilk.

Steelers defensive line coach Karl Dunbar explained Pittsburgh’s rational with uncharacteristic color, “I come from the South. What we say down there is that defensive linemen are just like pretty women. There’s not a lot of them, and everybody wants some.” 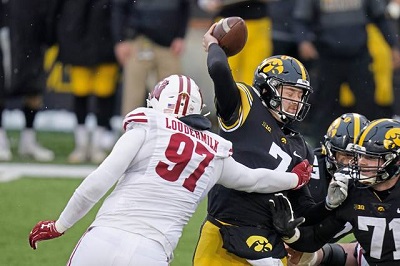 Isaiahh Loudermilk stands 6-foot-6 senior and weighs 274 pounds and will remain as a defensive lineman – there had been speculation he could transition to outside linebacker. At Wisconsin made 26 starts while playing in a total of 40 games. He registered 63 tackles, including 11 1/2 for loss, and 7 1/2 sacks in his career.

Here’s a look at his tape:

Someone Needs to be Looking Over Their Shoulders in Pittsburgh

The addition of Loudermilk gives the Steelers a total of 12 defensive lineman on their off season roster. Clearly, all of them cannot stay. Karl Dunbar confirmed that Loudermilk will play both defensive end and nose tackle, and could challenge for a spot in the rotation to back up Cam Heyward, Stephon Tuitt and Tyson Alualu.

Their spots are safe, but Isaiah Buggs, Carlos Davis and Henry Mondeaux should take caution to avoid signing any long-term leases to stay in Pittsburgh.

In 2013 he traded up to grab Shamarko Thomas and in 2012 he did the same to grab Ta’amu Alameda. Shamarko Thomas contributed on special teams but never even came close to sniffing his status as heir apparent to Troy Polamalu.

Ta’amu likewise had been seen as a potential successor to Casey Hampton and instead was best known for his drunken rampage through the South Side.

Still, Loudermilk figures to push everyone else harder. Welcome to Steelers Nation.