They say its “Not easy being Green.” I suppose that’s true. It also can’t be easy being tapped to play center for the Pittsburgh Steelers because let’s face it, you’ve got enormous shoes to fill.

Nonetheless that’s exactly what the Steelers asked Kendrick Green to do when they drafted him in the 3rd round of the 2021 NFL Draft to be their next center.

That’s a guy we had our eye on. We love the way that he plays in terms of what we have been talking about and in terms of changing our demeanor. Just the type of attitude that we want to carry onto the field, he embodies all of that. He has great leadership qualities. He was an alpha in that program and he is just a tremendous player. He can do it all – the pulls, physical in the run game, pass protect, all those different things. I’m just really ecstatic to coach him going forward.

You of course expect a position coach to speak glowingly of the player that he’s just had a huge hand in drafting.

Klemm has been the favorite of several of the staff at Steel City Insider. Just under one month ago Roy Countryman exuded “He originally came to Illinois as a defensive lineman and you can observe that level of tenacity in his blocking style as he seeks to bury and destroy his opponents.”

On two separate occasions Doug Martz went as far as to argue, “….those who research Green will realize he could be next up in a long heritage of great centers for the Steelers.” Those great Steelers centers would be Ray Mansfield, Mike Webster, Dermontti Dawson, Jeff Hartings and Maurkice Pouncey.

If you think that’s a bit of an exaggeration, then look no further than the words of Matt C. Steel, never one to shy away from criticizing Steelers coaching or personnel decisions, was somewhat prophetic, indicating that:

Green offers potential for the Steelers to have another athlete at center who can pull and get out on the move. Should the top three centers be drafted before the Steelers pick in Round Two, Green could top the Steelers’ Round Three wish list.

If nothing else, the opinion on Kendrick Green is unaminmous of at least one sub-segment of the Steelers draft pundit class. 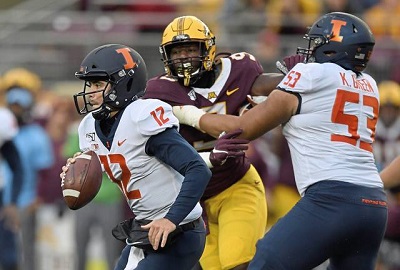 Kendrick Green played guard for most of his time at Illinois playing a guard and he of course started his college career as a defensive lineman. Here is his highlight reel:

Yes, Kendrick Green does seems to have some of that nasty, ass-kicking streak that an offensive lineman really needs to excel in the NFL.

How Kendrick Green Fits into the Steelers Plans

Kendrick Green has something in common with Steelers 2nd round pick Pat Freiermuth and Pittsburgh’s first round pick Najee Harris: He’s got a very strong shot at starting on opening day.

The Steelers cupboard of offensive lineman is very bare, and while Steel Curtain Rising has rated tackle as a greater need than guard, the truth is that neither B.J. Finney nor J.C. Hassenauer projects as a starter at center.

Indeed, if Green can come in and win the starting job at center, his contribution will have a ripple effect, as it will allow B.J. Finney to be the “next man up” at both guard and center.