Well, I guess we know why the Steelers didn’t sign Jesse James, although its clear that someone on the South Side was had their ear tuned to the purr of the Nittnay Lions.

One night after playing it strictly by the book in the 2021 NFL Draft, the Steelers departed from the script and drafted Penn State tight end Pat Freiermuth with their second pick.

Still the expectation was that the Steelers would stick to the offensive line during round two, drafting either a center or an offensive tackle. However, two of the tackles Pittsburgh purportedly coveted were off the board before they could pick, and Kevin Colbert stuck to his pledge not to sacrifice draft picks to move up.

Steelers tight end coach Alfredo Roberts explained the decision to pick Freiermuth: “He’s going to be a kind of throwback tight end. He can play different positions, do multiple things. His position flexibility will allow us to do a lot of different things.”

And the Steelers do need a tight end who can “do a lot of different things.” 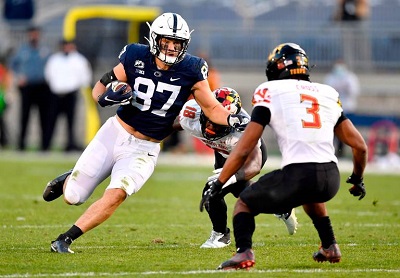 At 6-5, 251 pound and having worn 87 for Penn State, Pat Freiermuth certainly fits the bill of a two way, throwback tight end. Here’s a look at his tape.

He certainly has good hands and definitely does not shy away from after the catch contact. Doing it in the NFL won’t be quite as easy as it was doing it in the NCAA, but he offers a lot of promise. It would be nice to see video on his blocking, but I guess that doesn’t generated page views.

How Pat Freiermuth Fits into the Steelers Scheme 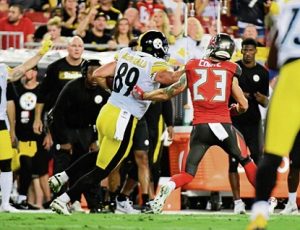 The Steelers have been wandering in the wilderness at tight end since Heath Miller. Heath Miller was a picture of dependability in the passing game, a strong blocker and a quiet force who led by example in the locker room.

Since Miller departed, Pittsburgh has thrown money at Ladarius Green, whose ankle and concussion injuries limited him to a handful of games and qualified him as one of the Steelers all-time free agent busts.

They traded for Vance McDonald, who was injured most of his first year in Pittsburgh. Vance McDonald had a strong season in 2018, was inconsistent in 2019, and used sporadically in 2020. Things got so bad in 2019 that Kevin Colbert had to trade for Nick Vannett and Mike Tomlin started him that very week. (Nick Vannett played well in that first game, then disappeared.)

For a while there, it looked liked Xavier Grimble might have worked himself up from the practice squad to a competent number 2 tight end, but that was not to be either.

They signed Eric Ebron as a free agent last spring, and while Ebron did some nice things, particularly in the Red Zone, his blocking skills are non-existent and he had trouble holding on to the ball. As for Zach Gentry he hasn’t done much other than get injured.

Suffice to say, Pat Freiermuth doesn’t even need to complete the run test at St. Vincents to immediately upgrade the Steelers depth chart at tight end.