With their first pick in the 7th round of the 2021 NFL Draft the Steelers bolstered their secondary by drafting cornerback/safety Tre Norwood, who played his college ball at Oklahoma.

The NFL’s draft site labeled Tre Norwood as a cornerback the Steelers announced him as a safety, but Mike Tomlin called him a “Swiss Army Knife/utility back/safety.”

Early in his career he played cornerback but gravitated to safety later in his career. As far as it concerns the Steelers, it really doesn’t matter – Pittsburgh is desperate for backups at both cornerback and safety. 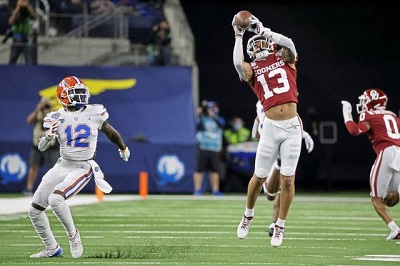 The 6 foot 192 pounder Norwood caught the attention of scouts thanks to his ball skills, as he intercepted 5 passes during the 2020 season, tying for 3rd national and leading the Big 12. Here’s a look at his highlight tape:

Looks good. He won’t find NFL quarterbacks throwing passes that are that easy to pick off, but he does know how to catch a ball.

How Tre Norwood Fits in with Steelers

The Steelers look to field a strong front four in their secondary, with Cameron Sutton, Joe Haden, Terrell Edmunds and Minkah Fitzpatrick. The team is likewise high on James Pierre as a number 3 corner.

That latter of has proven nothing in 2 years in the NFL and Antoine Brooks is untested. But at the end of the day, Tre Norwood, the Swiss Army Knife, is a 7th round pick. 7th round picks can make a difference as rookies – just look at Kelvin Beachum in 2012. And in 1992 8th round pick Darren Perry won the starting job.

Hopefully, they’ll be no demand for his services in 2021 beyond that. Welcome to Steelers Nation Tre Norwood.