Legendary Steelers safety, Troy Polamalu, took to Twitter on Tuesday to announce that he has selected another legend, his former defensive coordinator, Dick LeBeau, to present him at his Hall of Fame induction this August in Canton, Ohio.

I wish I would have been smart enough to see this coming, but it just goes to show you how stupid I am for not spotting the obvious this whole time.

Polamalu is the first inductee out of a group of Steelers’ defenders that helped the organization win its fifth and sixth Lombardi trophies in Super Bowl XL and Super Bowl XLIII. But Dick LeBeau was going to be the presenter regardless of who made it into Canton first. 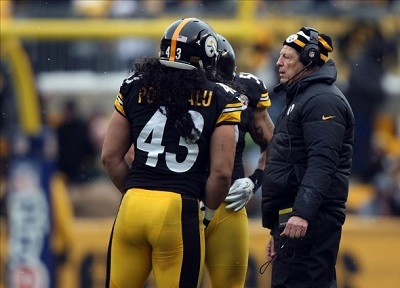 In fact, even though most are long-shots to join Polamalu, if any or all of the players that took LeBeau’s 3-4 zone-blitz defense and made it famous were to get that call for football immortality — including James Harrison, Joey Porter, Aaron Smith, Casey Hampton, James Farrior and Ike Taylor — there’s no doubt that every single one of them would pick LeBeau to be their presenter. Heck, by the time he got through doing all that presenting, LeBeau would have enough training for a second career as a motivational speaker.

It’s amazing how much universal love there is for Dick LeBeau, who was already a popular figure with his players during his first stint as the Steelers defensive coordinator in the mid-’90s under head coach Bill Cowher. 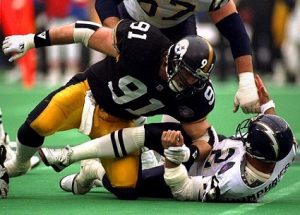 But it was during LeBeau’s second stint as the Steelers defensive coordinator from 2004-2014 when the love affair between him and his players really became a sight to behold.

It became a tradition around the holidays for LeBeau to read the classic, “The Night Before Christmas” to his players–and those big, tough football players sat there and listened like little kids!

The next time you hear a former player say anything bad about LeBeau, it will be the first time. And if word ever got back to the likes of Harrison and Brett Keisel, I’d hate to be that former player.

Speaking of Harrison, perhaps the biggest, baddest defender LeBeau ever coached, he once broke down in tears on national television while talking about his former defensive coordinator. This was back in 2013, months after Harrison was released by Pittsburgh and then signed with the Bengals. No player ever forgets LeBeau, the man they affectionately called Coach Dad during his second stay in Pittsburgh.

In the lead-up to the 2005 regular-season finale against the team that he spent his playing days with–the Detroit Lions–every single one of his defenders bought and wore a No. 44 throwback Lions jersey in LeBeau’s honor.

The kind of connection LeBeau often developed with his much-younger players was rare then and it’s rare now. I guess that’s because LeBeau treated his players like men and genuinely cared about them. He didn’t command respect through words and a presence; he earned it through his actions and the ability to teach them.

In typical Troy Polamalu fashion, he couldn’t have been more humble when he revealed the name of his presenter, Tweeting, “Can you please tell them that all I did was follow you…#eachoneteachone

Maybe it’s fitting that this kind, gentle man once described his zone-blitz scheme as “Tweaking someone’s nose while you go behind them and kick them in the tail.”

The zone-blitz scheme was all about deception, but it was still a rough and tough defense, one that allowed his players to wreak havoc on opponents week in and week out.

I’ll leave you with one more quote about LeBeau courtesy of a 2006 ESPN.com article and courtesy of another player who deeply admired him, Kimo von Oelhoffen:

“Probably the best man, and not just one of the best coaches, I’ve ever met in my life. The things I’ve learned from him about football and about life, I’ll cherish forever, really. Every minute you’re around him, believe me, is a minute where you’ve benefited in some way.”