With David DeCastro’s Steelers career coming to an end it is time to assess his legacy. That can be tricky with offensive lineman, who don’t generate statistics to compile and compare. But that doesn’t matter with David DeCastro, because DeCastro defined himself with his attitude.

Offensive lineman author signature plays too, but these by definition come in a supporting role. Alan Faneca’s block that swung Willie Parker’s 75 yard run in Super Bowl XL comes to mind. But each of those has something common: They all they shifted the outcome of playoff games at critical junctures.

David DeCastro’s signature play is unique because it came during the regular season and actually cost the Steelers 15 yards during a 2 minute drill! 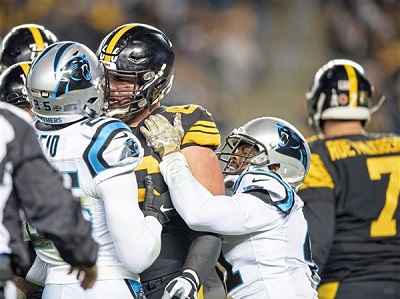 David DeCastro gets in Eric Reid’s face during the Steelers 2018 win over the Panthers. Photo Credit: Post-Gazette.

IT came on a balmy Sunday night during September 2014 in Carolina. The Steelers had opened the season with a nail biter win over the Browns and then gotten ripped apart by the Ravens. The Carolina Panthers were coming off of a 12-4 season and were seen as NFC contenders.

As half-time approached, the Steelers hung to a slim 6-3 lead thanks to two Shaun Suisham field goals. Ben Roethlisberger was running the two-minute drill and the Steelers were sniffing the Red Zone. Roethlisberger hit Justin Brown for a 4 yard gain.

Luke Kuechly tackled him. He stripped the ball from Brown after the whistle and held him down as he tried to get up. Then, when both got to their feet, Luke Kuechly pushed Brown, as if to remind him who was the biggest boy on the block.

He crossed the distance and unloaded on Kuechly. The linebacker remained on his feet, but DeCastro had put him in his place. All this happened right in front of the official, who flagged DeCastro for 15 yards and essentially ended any chance of a touchdown. (Suisham did make a 45 yarder for a 9-6 half time lead.)

You call a 15 yarder at the 28 with 33 second to play a costly penalty? Fine, I’ll call it addition by subtraction.

Offensive line is one spot on the depth chart that transcends measurables. Sure, offensive lineman must be big. They need strength, a lot of strength. Agility is essential. But more than anything else, they need attitude. And they need a little streak of nasty. Because at their core, successful offensive lineman impose their will.

Justin Brown was first year player and roster bubble baby who’d worked himself up from the practice squad. The Steelers cut him before the season’s end. Most fans didn’t who he was then let alone remember him today.

None of that mattered to David DeCastro. He made it clear to Kuechly, the Partners and the rest of the NFL that these Pittsburgh Steelers weren’t going to be intimated, they were going to be the intimidators.

During those early years, the team’s strategy on offensive line was “Plug and Patch.” They’d sign guys and then cut them in the middle of their contract. Kevin Colbert and Mike Tomlin began moving away from that in 2010 by picking Maurkice Pouncey, Marcus Gilbert in 2011 and DeCastro in 2014.

The late, legendary scribe Ivan Cole labeled the offensive line’s performance against the Panthers as “scary good.” Scary good it was. The game marked the last time that the Steelers had two 100 yard rushers in the same game, as Le’Veon Bell ran for 141 yards and LeGarrette Blount ran for 118 – in mop up time.

Sure, Bell and Blount had runs of 81 and 50 yards, but that’s the point: The offensive line was in full road grading mode that night, open holes that you could drive trucks through.

David DeCastro was one of the foundations of that group and attitude was the difference maker that DeCastro brought to the table.