The Pittsburgh Steelers opened 1999 in unfamiliar territory:  Instead of playing in the post season, they were watching from home. You can criticize the Steelers brain trust of Bill Cowher, Tom Donahoe and Dan Rooney for many of their 1999 off season decisions.

Kordell Stewart struggled mightily in 1998. So the Steelers response of firing Ray Sherman and replacing him with Kevin Gilbride was expected. Giving Stewart a 5-year extension that would pay him 27 million more dollars was decidedly unexpected. Yet that’s just what the Steelers did.

Kordell Stewart had hardly been the only one at fault during the up-and down 7-4 start and the ensuing game season-ending meltdown. The offensive line, secondary, and wide receiver had been weak spots.

So the Steelers let Carnell Lake go, a mainstay in the defensive backfield since 1989, and replaced him with Travis Davis. Former first round wide receiver Charles Johnson was allowed to walk, too. They also brought in not one, but two tackles, Wayne Gandy and Anthony Brown.

Today, we know that Troy Edwards was a bust, but the pick was popular at the time. But there’s a backstory behind the pick.

As Troy Edwards’ name was being sent to the podium, the Steelers were on the phone with Jevon Kearse. This factoid only emerged in 2016, but today it tells us something very important about how and why the Steelers 1999 season unfolded the way it did. 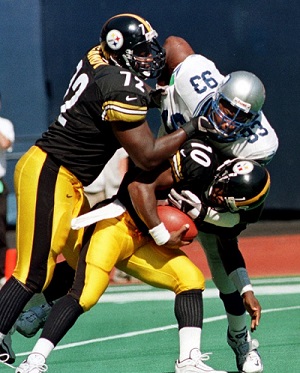 The Cleveland Browns returned to the NFL after a 3-year hiatus on September 12th 1999 against the Pittsburgh Steelers. The city of Cleveland was ecstatic. The Browns were back! 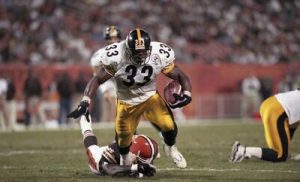 The Steelers amassed a 20 to 0 zero half time lead, which became a 27 to 0 3rd quarter lead after the first two series. Bill Cowher pulled Kordell Stewart in favor of Mike Tomczak and then Pete Gonzalez. Jerome Bettis gave way to Richard Huntley and then Amos Zereoue. The Steelers won 43 to 0, registering their first shutout in two years.

But Pittsburgh made it look easy, incredibly easy. Was the 1998’s 0-5 implosion  just a mirage?

Three Rivers Stadium welcomed the Browns for the first time in 3 years in week 9 of the 1999 season. The Steelers were on a 3 game winning streak. Cleveland came to Pittsburgh seeking its first win.

Still, the Steelers kicked another field goal to start the 4th quarter, making it 15 to 7. That made the lost point inconsequential. Didn’t it?

With about 7 minutes left, the Steelers forced a Browns punt and simply had to kill the clock. Yet after Jerome Bettis gained 6 yards, Kordell Stewart misfired to Mark Bruener. Then he tried a bubble screen to Troy Edwards. 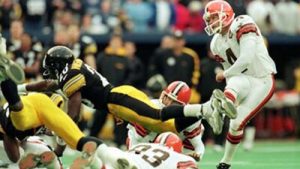 The Browns scored a touchdown 3 plays later, but their 2 point conversion failed. This time the Steelers tried pounding the ball, calling 7 straight running plays but were forced to punt at the 2-minute warning. The Browns milked all but 2 seconds off of the clock before kicking the game winning field goal.

The Steelers had opened the season by welcoming the Browns back to the NFL by wiping the floor with them. Nine weeks later they were wiping egg off of their faces after giving the Browns their first win since 1995.

After the game, team leader Levon Kirkland confessed, “I’m not going to say it’s the most embarrassing loss, because you never know what’s going to come up next.”

The worst part of it all? Kirkland was right.

In Between the Browns Bookends: Torment and Tease

So what happened in between those Browns bookend games? The Steelers followed their opening day romp over the Browns with a lackluster win over a middling Ravens team. The Steelers returned to Three Rivers Stadium to suffer a 5-interception blowout loss to the Seahawks, followed by 17-3 home loss to the Jaguars that saw free agent tackle Wayne Gandy give up sacks on back-to-back drives that resulted in safeties. 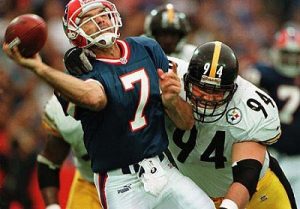 After the game Bill Cowher commented that Kordell Stewart could have benefited from seeing Doug Flutie in action. This was ironic, because Stewart’s success in 1997 helped pave the way for Flutie’s NFL return.

For as bleak as things looked during those three losses, the Steelers rebounded with three straight wins. Their win on Monday Night Football against the defending NFC Champion Falcons ended with not one, but two “Who wants it more?” 4th quarter goal line stands.

Pittsburgh followed that with a 27-6 road win over the San Francisco 49ers and by all appearances, the Steelers had done what so many previous Bill Cowher teams had done before them: Right themselves after stumbling early.

Wrong. The Steelers had only set themselves up for a bigger fall.

The 1999 Steelers fulfilled Levon Kirkland’s worst fears by losing 7 of their next 8 games and in the process looked worse than any Steelers team had looked since 1969. Chuck Noll’s 1986 and 1988 teams had finished 6-10 and 5-11, but at least both of those squads were playing their best football by season’s end.

But The 1999 Steelers found new ways to get worse as fall faded into winter. 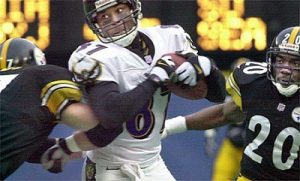 The bottom fell out of the defense. On the road against the Titans, Chris Sanders hauled in a 46- yard reception as Travis Davis and Scott Shields essentially “watched.” Two weeks later Qadry Ismail came to Pittsburgh and scorched the Steelers secondary for 258-yard, 3-touchdown game.

During a loss to a terrible Bengals team Bill Cowher benched Kordell Stewart. Fans cheered as Mike Tomczak took the field, but the results were the same.

The Steelers did secure a post-Christmas win over the Carolina Panthers. But that win came by way of Shar Pourdanesh replacing the inept Anthony Brown and Chris Conrad who’d been alternating at right tackle, and some mid game snow that inspired Jerome Bettis to a 100-yard game. 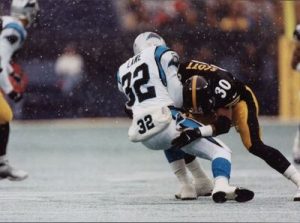 The season ended with a sloppy 47-36 loss to a Tennessee Titans backup squad that featured Bobby Shaw flashing a Superman shirt in front of cameras following a garbage-time touchdown, yet another safety and Levon Kirkland getting muscled out of bounds by Neil O’Donnell following an interception. Worse yet, although the Steelers started at the Titans 5-yard line and ran 6 plays, they still failed to score.

Cowher-Donahoe Feud Comes to a Head

The feud between head coach Bill Cowher and Director of Football Operations Tom Donahoe that had been simmering for years was consuming the team. Donahoe’s “flat” comment following Fog Bowl II first exposed the tensions between the two men but by 1999, things had become unmanageable. 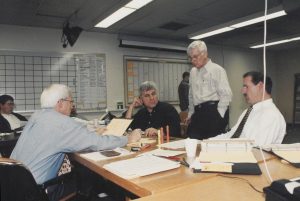 The fact that the front office and head coach weren’t even on the same page regarding the first round draft reveals just how deep the dysfunction sank.

In the week leading up to the Bengals loss, 3 separate national stories reported that Bill Cowher was planning to leave the team. Tom Donahoe had strong relations with the press, and could have swatted it down with an off-the-record denial.

Steel Curtain Rising has zero evidence to suggest that he declined an opportunity to do so. But after the Steelers laid an egg against the Bengals, Donahoe was on the record and his tongue was particularly sharp as he quipped, “Let me say this, I think we’re more talented than Cleveland and Cincinnati.”

A few days later, Cowher insisted that he was staying, and retorted, “I know what my responsibilities are to this football team and what I’m here to do. That’s to coach a football team, to coach the players I have.”

Late in the season as losses cascaded into bigger, uglier losses, Lee Flowers called out his teammates for “loafing.”

Normally, when players quit on a losing team, it is an indictment of the head coach. But by 1999, this wasn’t a “normal” Steelers team. In his self-titled autobiography, Dan Rooney reveals that Bill Cowher barred Donahoe from attending coaching meetings because he thought he was a “spy.”

Cowher’s instincts were correct. After the season it was revealed that Tom Donahoe had been privately bashing Cowher to the press.

But even the most brilliant football minds can’t function successfully if they can’t cooperate. The Pittsburgh Steelers are anything but immune. Art Rooney, Jr. led the greatest scouting team pro football has or ever will see. Chuck Noll was one of the greatest coaches in the game.

Dan Rooney again had a decision to make. And once again, Dan backed his coach over the front office and fired Tom Donahoe.