“There’s a big opportunity to win here. I think the tradition, the stability, the credibility of the front office and the wealth of talent on this team is exciting to any football coach….” – Bill Cowher, on his first day as Steelers head coach.

“…And Mark Royals standing at his own 40, the rush – and he’s passing down field and he completes the pass pulled in by Warren Williams…” – Jack Fleming during the Steelers 1992 opening day victory vs. the Houston Oilers

It may have taken 15 years for him to do that, but Bill Cowher’s confidence inspired the 1992 Steelers, the city of Pittsburgh, and the team’s nationwide legion of fans. Steel Curtain Rising’s look at the Bill Cowher years starts where it all began, with the Steelers 1992 season. 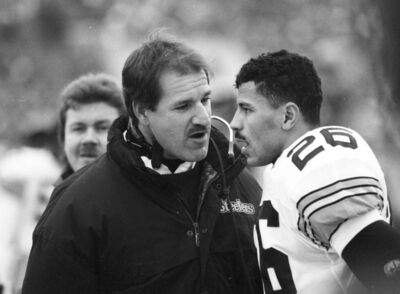 Bill Cowher’s declaration shocked reporters, who rolled their eyes at Cowher’s contention that the Steelers had a “wealth of talent” and “no glaring weakness.” A Pittsburgh Post-Gazette preseason reprint from the book Cowher Power, argued that the 1992 Steelers would be lucky to post a winning season while assailing nearly every position on Pittsburgh’s roster.

Just three years earlier the 1989 Steelers storybook season had ignited hope that the Steel Curtain was finally rising again. Chuck Noll openly spoke of “Championship talent.” The Emperor felt he could win big again. But the playoffless, 9-7 1990 Steelers season effort earned the Steelers an “Underachieving” label. By the time Noll retired after a 7-9, 1991 campaign, most NFL observers, inside and outside of Pittsburgh, wrote the Steelers roster off as mediocre at best.

Bill Cowher saw things very differently, and early on, he refused to flinch when challenged to prove it.

And so it was, that the 1992 Steelers began the Bill Cowher era in Houston, taking on the division rival Houston Oilers in the Astrodome. Bill Cowher’s 1992 Steelers had looked “OK” in preseason, but preseason means nothing.

Lore has it that, rather than discuss the challenge presented by the 11-point underdog Steelers, the Houston Chronicle focused most of its Sunday morning opening day coverage how it was imperative that the Oilers secure home field advantage during the playoffs.

The Steelers fumbled away their first two possessions, in effect spotting the Oilers 14 easy points to start the first quarter. But then, on 4th and 15 at the Oilers’ 45, Bill Cowher ordered punter Mark Royals – who’d never thrown an NFL pass before, to go for it. Warren Williams caught Royals’ pass and scampered 44 yards, setting up a Barry Foster touchdown.

Larry Griffin, rookie Darren Perry and Rod Woodson picked off Warren Moon 5 times, and in the process ended two would-be game-willing drives by the Oilers. Dwight Stone ran reverses twice, including one on third and long. When it ended, the Pittsburgh Steelers stood as 29-24 victors in a game no one gave them a chance of contesting, let alone winning.

Bill Cowher’s Steelers sustained their momentum, with a home opening win over the New York Jets that saw Barry Foster run for 190 yards, followed by a road victory of the San Diego Chargers. In the blink of an eye, the Pittsburgh Steelers had shot from afterthought to the talk of the NFL. The Steelers fell in their next game to Brett Favre’s debut and lost the following week to Cleveland, setting up a critical mid-season stretch.

Something Special Happening with the Steelers

The 1992 Steelers snapped their 2 game losing streak with an impressive shutout of the Cincinnati Bengals on Monday Night Football, giving them a 4-2 record heading into a critical 3 game stretch against the Kansas City Chiefs, the Houston Oilers, and the Buffalo Bills.

As Steelers Digest editor Bob Labriola observed at the time, a win over any of these teams would still be considered “an upset.”

This three game stretch would define the 1992 Steelers as contenders or pretenders. The Steelers traveled to Arrowhead Stadium, then considered an extremely difficult place to play, and blindsided the Chiefs to the tune of 27 to 3. In the process, Bill Cowher not only bettered his mentor Marty Schottenheimer, but also managed to keep Derrick Thomas and Neil Smith off of Neil O’Donnell, while the Steelers defense racked up 3 interceptions and Greg Lloyd added two sacks.

No, this wasn’t the “On any given Sunday credo,” but rather a reflection of the reality that 1992 Steelers had proven they were for real. Although it’s been almost a quarter century since I read the words in Steelers Digest, the memory of Labriola’s words still raises the hair on my arm. I’ll paraphrase that passage here:

Something very special is happening to this team and this city. A win next week over the Houston Oilers will give the Steelers sole possession of the AFC Central; energize the city and galvanize their nationwide legion of fans. The possibility of playoff games at Three Rivers Stadium will become a reality for the first time in a decade.

The Houston Oilers refused to go gently into the good night, as they held a 20 to 7 lead going into the 4th quarter.

But the Steelers fought back, and twin touchdown passes from Neil O’Donnell to Adrian Cooper put Pittsburgh into the lead. Houston made one final stab at victory, racing to midfield with the clock ticking. Assistant coaches implored Bill Cowher to use the Steelers time outs. Cowher balked, saying, “He’s going to miss the field goal.”

Walking into the locker room, Rod Woodson proclaimed, “We OWN the division baby!” He was right. The 1992 Steelers took possession of the AFC Central lead that day never looked back, winning their first AFC Central title since 1984.

The 1992 Steelers won five of their next eight games to finish 11-5. Nationwide, fans took notice. As Ed Bouchette reports in Dawn of a New Steel Age, when the Steelers would arrive at their hotels for road games, they were suddenly greated by thongs of fans cheering “Here We Go Steelers! Here We Go!” Veterans like Tunch Ilkin had seen a little of this in 1980 but never since.

Although they weathered some close calls and an injury to Neil O’Donnell combined with two subpar games from Bubby Brister, they qualified as only bumps in the road: The 1992 Steelers entered the playoffs as the AFC’s number one seed.

There’s something electric about a home playoff game played in front of a fan base that believes in your team, and even on TV, it was evident that the fans at Three Rivers Stadium believed.

Cowher started Neil O’Donnell. O’Donnell wasn’t fully healthy and it is a decision Cowher now regrets. The Steelers crossed mid-field over a half dozen times, yet could only score 3 points. 4th string cornerback Richard Shelton infamously dropped an interception that had pick six written all over it.

But the fact that the Steelers Digest could even discuss a Super Bowl run revealed just how thoroughly Bill Cowher’s arrival had transformed the Pittsburgh Steelers.

And that’s the real achievement of Bill Cowher’s first season: The 1992 Steelers didn’t succeed in winning the Super Bowl, but Cowher Power had succeeded in awakening Steelers Nation.