On the eve of training camp the Steelers moved to shore up a major weakness on their depth chart by signing free agent outside linebacker Melvin Ingram.

Coming out of South Carolina, the San Diego Chargers drafted Melvin Ingram with the 18th pick in the first round of the 2012 NFL Draft. The Chargers sent Ingram’s name to the podium six picks before the Steelers selected David DeCastro, and ironically it is DeCastro’s departure that paved the way for the signing.

At outside linebacker the Steelers have T.J. Watt, whom they’re looking to lock down to a long term deal, and 2nd year player Alex Highsmith. During free agency Pittsburgh lost Bud Dupree and Olasunkanmi Adeniyi leaving them with journey man Cassius Marsh and 6th round draft pick Quincy Roche. 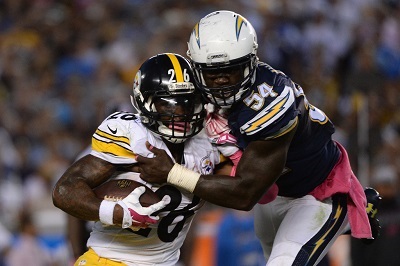 Who is Melvin Ingram?

Melvin Ingram is a 3 time Pro Bowler and has played his entire career for the San Diego/Los Angeles Chargers. During that time he has started 96 games and participated in 113 games. His resume includes two 10.5 sack seasons and has made a total of 49 sacks in his career.

He has also logged 3 interceptions forced 14 fumbles and made 70 tackles behind the line of scrimmage. Injuries limited Ingram in his 2nd and 3rd years in the league, but then he remained relatively healthy starting 16 games for 4 straight seasons, until missing 3 games in 2019.

A knee injury landed Ingram on the injured reserve list twice in 2020 and it was his least productive of his career.

Like Trai Turner, the guard the Steelers signed to replace David DeCastro, Ingram was looking for a job for a reason. However, he gives the Steelers experienced depth where they need it the most.

Defensive Back Next? Doubtful

If outside linebacker was unquestionably the Steelers thinnest slot of the depth chart, cornerback was second. The Steelers have Joe Haden and Cameron Sutton, but after that they’re limited to James Pierre and Justin Layne.

While the Steelers could use a boost of either quantity or quality at cornerback, the only way they’re likely to get one is via the waiver wire.