The Steelers entered the 2006 offseason riding high after bringing home the franchise’s first Lombardi trophy in 26 years, thanks to a 21-10 victory over the Seahawks in Super Bowl XL. It was certainly a magical run along the way, one that saw the 2005 Steelers become the first team in NFL history to claim a Super Bowl title after winning three playoff games on the road. Head coach Bill Cowher, a Pittsburgh native, finally captured the championship that had so frustratingly eluded him for 14 years.

The question was: Could Bill Cowher do it again? 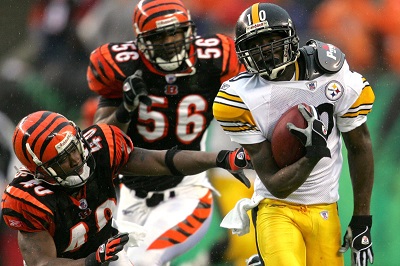 Speaking of magical, running back Jerome Bettis, the popular veteran nicknamed “The Bus,” won his only Super Bowl in his hometown of Detroit before taking the stage and announcing to the world that he would be riding off into the sunset following a legendary 13-year career.

In terms of free-agent losses, being Super Bowl champions and all, the Steelers naturally lost some key players who had put themselves on the map at just the right time, including safety Chris Hope, defensive lineman Kimo von Oelhoffen and receiver and Super Bowl XL hero, Antwaan Randle El.

The only free-agent pickup of note was the signing of Ryan Clark, who was brought in to replace the departing Hope at free safety.

As far as the 2006 NFL Draft, the Steelers, who were depleted at receiver after losing both Plaxico Burress and Randle El to free agency in back-to-back offseasons, traded their first, third and fourth-round picks to the New York Giants in order to move up seven spots to select Santonio Holmes, a big-play receiver from Ohio State University.

Other than Holmes, the only member of the eight-player draft class who would ultimately go on to be a major contributor in the future was offensive lineman Willie Colon, a fourth-round pick from Hofstra.

Steelers Get Head Start on Super Bowl Hang Over

The atmosphere in Pittsburgh in the months after the Super Bowl felt festive, as the city, fans and players seemed to celebrate the One For The Thumb as if they had been waiting, well, 26 years for such a release. Fans came out in droves in the days after Super Bowl XL to watch and participate in a parade that was a long-time coming. Even the reserved Troy Polamalu made headlines by crowd surfing during the festivities, as folks ate up every last second of this joyous occasion.

The party never seemed to stop that offseason, and many players, including quarterback Ben Roethlisberger, receiver Hines Ward and even kicker Jeff Reed weren’t shy about hitting the town and reveling in this appreciation and adulation the fans had for them after ending the championship drought.

The partying came to an abrupt halt on June 12, however, when Roethlisberger was involved in a horrific motorcycle accident near Pittsburgh’s Armstrong Tunnels, Roethlisberger was hit by a vehicle that failed to yield to him and reportedly suffered a severed artery inside his mouth and nearly bled to death. In addition to the near-fatal nature of his accident, Roethlisberger also suffered a broken jaw and nose and would have to have reconstructive surgery to repair the damage.

Roethlisberger wasn’t wearing a helmet during the accident, something that was legal in Pennsylvania, and was the subject of criticism by fans and even those in the media, including legendary Steelers quarterback, Terry Bradshaw.

Roethlisberger certainly wasn’t 100 percent by training camp that summer, but he was on track to start Week 1 when he was forced to undergo an emergency appendectomy right before the start of the regular season.

Veteran Charlie Batch would get the start in the annual Thursday Night NFL Kickoff on September 7, as the Steelers opened up their season against the Miami Dolphins at Heinz Field. After a nip-and-tuck affair through three-and-a-half quarters, Batch, who completed 15 of 25 passes for 209 yards, connected with tight end Heath Miller for an 87-yard touchdown catch and run to give Pittsburgh a 21-17 lead with 6:11 remaining in regulation. 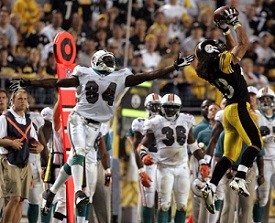 The Steelers killed an attempted Miami comeback with two interceptions. First Troy Polamalu stole a pass intended for Chris Chambers. Next, Linebacker Joey Porter sealed the deal moments later when he intercepted a pass from Dolphins quarterback Daunte Culpepper and returned in 42 yards for a touchdown. Pittsburgh won, 28-17, as Batch turned in perhaps his greatest performance as a Steeler, throwing three touchdowns and zero interceptions on the night.

The defending-champion Steelers were 1-0 and would have their franchise quarterback back 10 days later for a Monday night affair in Jacksonville.

If there were any fears about a Super Bowl hangover, they were heightened the following week, thanks to a 28-20 loss at home to the Bengals. The Steelers led, 17-14, late in the game, but a fumbled punt by Ricardo Colclough led to a go-ahead touchdown by Cincinnati. Moments later, reserve running back Verron Haynes fumbled, and the Bengals quickly turned that into yet another touchdown.

Following an early bye, Pittsburgh looked listless and lifeless during a 23-13 road loss to the Chargers on Sunday Night Football.

The Steelers seemed to have the ultimate statement game a week later, thanks to a 45-7 thrashing of the Chiefs at Heinz Field. Unfortunately, the Steelers made an even bigger statement about who they were by losing the next three games — including a heartbreaking overtime road loss to the Falcons, a matchup that was mired in controversy due to an apparent missed call by the officials when Pittsburgh looked poised to win at the end of regulation; and an embarrassing 20-13 loss in Oakland to a lowly Raiders team on a day in which Roethlisberger, who was concussed the previous week in Atlanta, threw four interceptions, including two that were returned for scores.

With the Ravens well out in front in the AFC North, Pittsburgh’s only shot was as a wildcard entrant, that is, of course, if the team could ever get on a roll and start winning some games.

Steelers Rally to close 6-2, but Fall Short of Playoffs

The Steelers did play much better in the second half of the season and won six of their last eight games. Sadly, the only two losses were beatdowns at the hands of the Ravens, who captured the division title with a 13-3 record and helped to eliminate their division rivals from playoff contention in the process.

The Steelers managed to glean a little satisfaction out of their dreadful season by knocking off Cincinnati in overtime in the final regular-season game, a result that ultimately cost the Bengals a wildcard berth.

The Steelers finished the year with an 8-8 record and would have to sit at home and watch someone else go on a magical postseason run en route to a Super Bowl title.

The 2006 campaign was arguably the worst one of Roethlisberger’s career, as he threw 18 touchdowns and 23 interceptions and finished with a passer rating of 75.4.

One of the few bright spots of the season was running back Willie Parker, who rushed for 1,494 yards and was voted team MVP.

The defense was respectable enough but certainly not its usual dominant self, as the unit tallied just 39 quarterback sacks, was often undisciplined and could do little to overcome the 37 turnovers by the offense.

Immediately after the Steelers’ overtime victory in Cincinnati to close out the year, speculation began about Cowher’s future with the team. Would he retire or resign?

We would get that answer soon enough, of course, as Cowher resigned after 15 years as the head coach of the professional football team he grew up cheering for.

Cowher’s final season in Pittsburgh didn’t end like he wanted it to, of course, but fortunately for him, he was able to accomplish the one thing he promised to do when he was hired by Dan Rooney way back in 1992: give the Steelers organization and its fans that elusive One For The Thumb.