The Pittsburgh Steelers defeated the Philadelphia Eagles 24 to 16 in their 2nd preseason game of the 2021 season. This game also marked my first game of preseason football 20 years after living aboard for that long.

Here are some quick hits from re-encounter with preseason football. 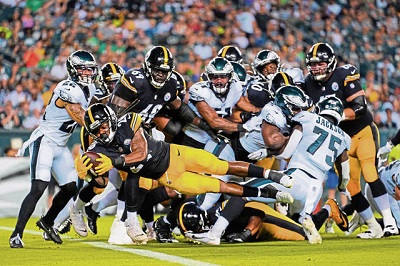 1. It is Good to See Preseason Again

Some will blanch at this, but the statement should come as no surprise given this site’s annual admonitions that we should all appreciate preseason.

The NFL could and should do more to improve the presentation of this part of its “product” but those comments will come in a future column.

The Eagles had a lot of success throwing to the middle of the field. And Jaylen Hurts wasted little time setting the tone by picking on Devin Bush who was on coverage and gave up a long gain on the second play of the game.

Fair enough. And let’s also remember that this was Bush’s first action since tearing his ACL. But Robert Spillane also looked to be on the wrong end of a lot of completions. And the Eagles had some success running up the middle. During the game the news broke that the Steelers were trading for inside linebacker Joe Schobert.

While this news has been confirmed yet, one can see why there’s interest.

3. Harris Living Up to the Hype?

One of the adages behind those “Grumpy Old Man” “Eat Your Peas and Carrots and Enjoy Preseason Football” articles is simple: Preseason might not tell us much about how good (or bad) the Steelers will be, but it often gives an excellent look at individual players.

But early in preseason it was clear that Jerome Bettis was the real deal, just as it had been equally clear a year earlier that Bam Morris wasn’t up to the task of replacing Barry Foster.

Aside from the analytics addicts who’ll tell you never to draft a running back in the first round, all we’ve heard about 2021 first round pick Najee Harris has been positive.

Sure, his numbers of 2 carries for 10 yards are pretty plain, but he also had two other nice runs called back on penalties. Along those lines, backup running back Anthony McFarland looks like he’s vindicating those who said, “The kid won’t do much as a rookie, but watch out after that.”

The battle to be Ben Roethlisberger’s backup has been one of the bigger stories of training camp. There’ve been conflicting reports as to whether Dwayne Haskins was gaining on Mason Rudolph or not.

Yes, this goes against the conventional wisdom that Haskins is gaining

Both men put up good numbers. But neither man was exactly throwing against the ’85 Bears. Of the two, Haskins looked a tad bit more decisive. In contrast, save for his long completion to Diontae Johnson, Mason Rudolph looked like Ben Roethlisberger ’20 edition lite.

Haskins wasn’t exactly channeling his inner Dan Fouts, but he was more aggressive, and his mobility was an asset. But then again, he wasn’t facing top-line starters. Neither man was inspiring, but that many not mean much. Mike Vick’s numbers during the 2015 preseason were excellent.

In all fairness to Haskins he has led drives that put 30 points on the boards, as opposed to Rudolph’s 0. But in all fairness to Mason Rudolph, he’s been playing against better competition.

Speaking of doing things when it counts, Joshua Dobbs has to be kicking himself. He started the summer on the outside looking in and his reps will be limited. Which makes his ugly interception all the more unfortunate.

5. Berry, Sammuels and Pierre Stepping It Up

After their Hall of Fame game against the Cowboys, Pressley Harvin III was proclaimed as the next “Josh Miller” largely on the strength of his directional punting. Jordan Berry got his shot, and pinned the Eagles into the 20 yard line on his first opportunity.

As Jim Wexell has reported at Steel City Insider, Berry was cut in favor of Dustin Colquitt last year on orders from way up high. But it does look like competition is bringing out the best in Berry.

Outside of his wildcat role and spot duty, Jaylen Samuels has been pretty quiet since lighting up the Patriots for over 100 yards at the tail end of the 2018 season.

He ran pretty well on those ten carries and turned his one reception into a 17 yard gain. Samuels knows what’s at stake and is playing like it. James Pierre also realizes the opportunity he has in front of him and is stepping it up.