One of my most distinct Steelers preseason memories took place in the final game of the 1988 exhibition schedule.

The Steelers came from behind and ultimately defeated the Saints in overtime at the Superdome in New Orleans, Louisiana. It was memorable for several reasons, not the least of which was the fact that most of the starters–including quarterback Bubby Brister — played the entire game. 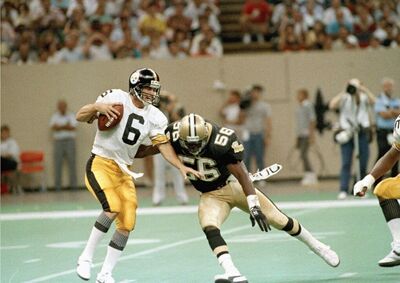 It wasn’t just Brister however. This was the game where Pat Swilling schooled John Jackson so thoroughly late in the 4th quarter that Chuck Noll had to be convinced not to cut him. While Jackson was a rookie 101th round draft pick, Swilling was 3 year veteran coming off a 10.5 sack season.

That’s how one does it in a perfect world. But it was a different world in 1988. Free agency did not exist, neither did the salary cap. Depth was much better because quality backups weren’t moving from one team to another in search of more money and more playing time.

Anyway, that all began to change in the early 1990s with the introduction of, well, free agency and a salary cap. This quickly began to change how most teams conducted their preseasons. The starters began to play less and less, and exhibition games became more a way for rookies and unproven players to showcase their talents than a means for the veterans to shake the rust off and solidify team chemistry.

No, instead, the next-to-last exhibition matchup became known as the all-important “dress rehearsal game.”

Such will be the case on Saturday night when the Steelers take on the Lions at Heinz Field. Quarterback Ben Roethlisberger will play, as will many other key players on both sides of the ball.

Just don’t expect those key individuals to play all that much, however. Roethlisberger will likely play a few series. As for the rest of the vital veterans?

I guess it all depends on who you consider to be a vital veteran. Cam Heyward certainly fits into that category. The same goes for safety Minkah Fitzpatrick and even Joe Schobert, the recently acquired veteran inside linebacker.

A lot of people complain about the lack of playing time veterans now receive during the preseason, but I have no problem with it at all. What’s more important: shaking off the rust or remaining healthy for the start of the regular season?

Based on the tone and scope of this article, I think you know my opinion. Is shaking off the rust important? It might be if the dress rehearsal game took place in the final week of the preseason and not the next-to-last week. Face it, once the last preseason game turned into a showcase for finding the final five or six players on a 53-man roster, that made shaking off the rust a futile endeavor, especially when the vast majority of teams begin Week 1 of the regular season over two weeks after Week 3 of the preseason.

This year, the Steelers’ first regular-season game won’t take place until 15 days after their final exhibition game. That means that Roethlisberger, for example, won’t see any live bullets for 22 days.

With a schedule so weird, I don’t even see the point of playing any key guys during the 2021 preseason. But if you’re head coach Mike Tomlin, you must walk a fine line. If none of your guys play in the preseason, people will point to that decision as a reason for a slow start. If you play your guys too much and one of them gets hurt, you’ll get criticized for that.

Finally, I’m okay with the preseason being about the young guys and the fringe players who are just looking to hold on. I can endure four somewhat boring preseason games if it helps the Steelers stay healthy for the regular season.