Sensing weakness, Kevin Colbert has traded for Jaguars inside linebacker Joe Schobert in exachage for a 6th round pick in the 2022 NFL Draft.

The importance of this development should not be underestimated. A quick look at history drives this point home. 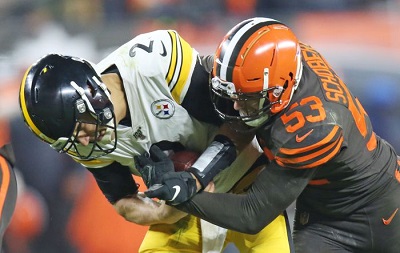 The Importance of the Center of the Steelers Defense

Before he left Pittsburgh, former defensive coordinator Tim Lewis told Jim Wexell that the strength of the Steelers 3-4 defense runs through its center. Meaning, that when the nose tackle, inside linebacking and safety must be stout for the rest of the unit to excel.

The first trio solidified the Steelers as contenders in the 1990’s, while the second trio dominated as Champions in the 00’s.

The game has evolved in the last decade to the point where the Steelers are in their “base” defense less and less. But that doesn’t make the center of the unit less important. When Ryan Shazier went down in 2017 with Mike Mitchell already faltering and Javon Hargrave hurt for the playoffs things went south fast (see the Jaguars game).

A lot of things went wrong for the Steelers down the stretch in 2020. Everyone focuses on Ben Roethlisberger’s struggles and while that’s understandable, the defense was struggling just as badly.

But quality took a hit when Vince Williams retired. And there’ve been signs that the plan to go with Robert Spillane, Marcus Allen, rookie Buddy Johnson and “veteran” Ulysees Gilbert III was faltering. As Mark Kabloy in observed in The Athletic that the Steelers have drilled the inside linebackers on covering back and tight ends extensively in camp, concluding, “If it is drilled that much, the Steelers must realize it’s an issue.”

Apparently, the experiment has been replicated enough to convince Mike Tomlin and Kevin Colbert that the answer lay outside of the Steelers locker room.

The Skinny on Joe Schobert

The Cleveland Browns drafted Joe Schobert in the 4th round of the 2016 NFL Draft. He led the league in tackles and earned Pro Bowl honors in 2017. He transformed that resume into a handsome payday in 2020 when he signed a 5 year, $53.7 million dollar contract with the Jacksonville Jaguars.

Last year for the Jaguars he started 16 games, had 3 interceptions including a pick six, forced 2 fumbles and registered 2.5 sacks.

The Steelers are well acquainted with Schobert. He’s suited up against them 8 times for both the Browns and the Jaguars and made Pittsburgh pay, pulling down 2 interceptions, batting away 6 passes, recovered 2 fumbles, recorded a sack while making 64 tackles.

Jim Wexell reminds us that prior to last year’s game against the Jaguars, Mike Tomlin admitted, “He’s gotten after us in the past. He beat us last year, quite frankly, in Cleveland. He was a significant component of that.”

Schobert did a number of the Steelers in infamous Body Bag game in November 2019, as the above photo of him sacking Mason Rudolph can attest. One has to wonder why the Jaguars were so ready to part with such a player so easily.

Schobert Instead of Watt?

In terms of salary cap ramifications, Joe Schobert will make $7 million this season, according to Spotrac.com and he has he has three years and 29.75 million remaining for 2022-24. While that’s not an exorbitant amount of money to pay for a veteran inside linebacker, the Steelers have limited salary cap space, and are still trying to resign T.J. Watt.

One has to wonder if the addition of Schobert today doesn’t signal a franchise tag for Watt next spring. Let’s hope not.