The Steelers have done some soul searching at inside linebacker this summer, culminating in the Joe Schobert trade. That move leads me to reflect on a bit of my own soul searching.

My discovery? Sometimes the player you’ve been longing for is staring you right in front of the face, and you only realize it after he is gone. And such is the case with Vince Williams.

Since the late 1990s this Steelers scribe has been clutching his Rosary Beads and crossing his fingers waiting for the Steelers to find “The next Jerry Olsavsky.” Vince Williams was exactly that player but it took his being cut, resigned and retirement for me to realize it.

This should have been clear far earlier, from December 15th, 2013 at the 11:56 mark in the first quarter to be precise.

If that point in Steelers space time is a bit foggy for you, here’s a refresher:

After starting the 2013 season 2-6, the Pittsburgh Steelers clawed their way back to 5-6, only to lose a heart breaker to the Ravens on Thanksgiving. Then the Miami Dolphins came to Pittsburgh, and spanked the Steelers in the snow. Up next was the Cincinnati Bengals, who were coming to Heinz Field with a 9-5 record as division leaders with a shot at a first round bye.

The Steelers won the toss. A couple of plays by Ben Roethlisberger, Le’Veon Bell and Antonio Brown earned a first down, but after that it was time to punt. 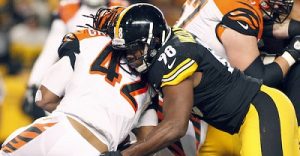 At the snap BenJarvus Green-Ellis got the ball and charged forward. He barely made it to the line of scrimmage thanks to the efforts of a rookie linebacker who’d been in street clothes on opening day.

On 3rd and 1, Vince Williams had stoned him, forcing a punt with Kevin Huber bobbled, setting up an easy Steelers score and a subsequent ass kicking of the Bengals.

At that moment it should have dawned on me that Vince Williams was the player I’d been waiting for.

Steelers outside linebacker capture our imaginations. They sack opposing quarterbacks, force fumbles and make the “Splash” plays that turn games. They become our heroes.

Sometimes they dazzle us, such as Ryan Shazier did. But when it comes to inspiring, inside linebackers just don’t make magic on the same level of magic as their outside brethren (Jack Lambert a true middle linebacker doesn’t count.)

So inside linebackers are underdogs. I’m a sucker for an underdog. 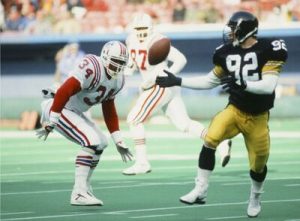 The Steelers of course drafted Jerry Olsavsky in the 10th round of the 1989 NFL Draft. In other words, he wouldn’t have been drafted today. Yet he not only made the 1989 regular season roster, he found himself starting in week 9 when Hardy Nickerson went down and earned a spot UPI’s all rookie team.

He did all of this, despite being, as Al Michaels described him on Monday Night Football, “One of those players who isn’t big enough, fast enough or tall enough, but just good enough.” In his first year as a full-time starter, 1993, Olsavsky blew up his knee in Cleveland Stadium and had to have multiple ligaments replaced.

Jerry O. left the Steelers after the 1997 season, played a year in Baltimore and thus began my desire for “The next Jerry O.” For a while it seemed like John Fiala might have fit that bill. But when Kendrell Bell got injured to start the 2002 season, it was Larry Foote and not Fiala that Bill Cowher put in.

But by the time the Steelers drafted Matakevich in the 2016 draft the Steelers already had Vince Williams for 3 years.

No one handed Vince Williams anything. He looked good in preseason, but with Larry Foote went down in the Steelers 2013 season opener, it was Kion Wilson who went in as Williams wasn’t even dressed.

Despite finishing his rookie year with the arrow pointed up, Vince Williams found himself starting his sophomore year behind Lawrence Timmons, Ryan Shazier and Sean Spence. Although he would only officially start 6 games in the next 3 seasons, Vince Williams was a fixture in the Steelers defense.

From 2015 through 2020, Vince Williams logged 44 tackles behind the line of scrimmage, 43 QB hits and register 20 sacks. Whatever Williams may have lacked in athleticism, he made up for with willpower and want to.

By the peak of his career, Vince Williams was the perfect complement to a pair along side a super athletic inside linebacker such as Ryan Shazier or Devin Bush.

Facing salary cap Armageddon, the Steelers cut Vince Williams earlier this spring. Rather than play for another team, Williams agreed to return for a veteran minimum salary. Yet, just before training camp, he had a change of heart and retired.

Pass coverage was never Vince Williams’ forte, so it’s entirely possible that had Williams continued to play, the Steelers will would have had to trade for Joe Schobert. But make no mistake about it, the Pittsburgh Steelers will miss Vince Williams in the locker room, inside the huddle and perhaps most of all, at the line of scrimmage.

Thank you Vince Williams on behalf of Steelers Nation. May you find our Life’s Work well.