The Pittsburgh Steelers and the Oakland-Los Angeles-Oakland-Las Vegas Raiders met for the 24th time yesterday at Heinz Field, as the men in Silver and Black prevailed 27-17.

The two teams may have now faced off 2 dozen times, but the game marked this citizen of Steelers Nation 2nd Steelers game in 2 years viewed from his native abode in suburban DC. It is only fitting then to begin the analysis of why Las Vegas won by borrowing the words of legendary WMAL/WTEM sports radio journalist Ken Beatrice, who reminded listener: “Injuries are as much a factor as talent and coaching in the NFL.”

But injuries impact every NFL team, and they only partially explain why the Steelers lost to the Raiders. The loss to the Raiders revealed a fundamental flaw that the Steelers must correct if they are to similar defeats in the future. 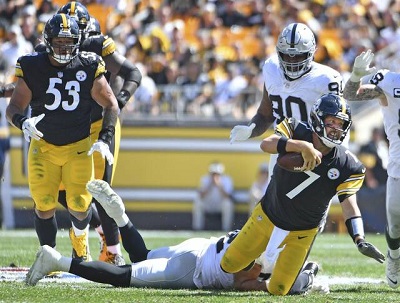 As Mike Tomlin explained after the opening day win over the Bills, the Steelers defense is supposed to go toe-to-toe with any team in the league. He made no apologize for that. And while he won’t say it, that’s also an implicit admission that the defense will have to carry the team early on.

Both men would get company in the training room, fast. Tyson Alualu fell first, going onto the cart with an ankle injury early in the game. At first it didn’t seem to matter, as T.J. Watt accounted for 4 tackles on the first 9 plays including a strip sack and a drive ending run stuff on third down.

And for a while, it seemed like the Steelers could manage without Watt. Melvin Ingram teamed with Robert Spillane on a key run stuff and helped force an incompletion in the end zone. And when the Steelers second team defense wasn’t making shut down plays, the Raiders tripped over themselves, taking one touchdown off of the board due to penalties and settling for 3 field goals instead of touchdowns.

This was good, because the Steelers offense struggled to get out of 1st gear.

During 2020 the skinny on the Steelers offense was simple. When Ben Roethlisberger could hit JuJu Smith-Schuster and Diontae Johnson on short, 5 to 7 yard routes, things were OK. If anything else was required to win, Pittsburgh had problems.

Najee Harris ripped off a nice 14 yard run, but other than that, he found no daylight. Outside of a 17 yard strike to JuJu Smith-Schuster, Roethlisberger’s successes were confined to 5 or 6 yard hook ups. He misfired deep to Chase Claypool twice and Diontae Johnson cut off his route way too early on another occasion leading to a Trayvon Mullen interception.

Fortunately, Roethlisberger and Johnson found their groove late in the 2nd quarter as they hooked up for a 41 yard catch, that set up a 6 yard JuJu Smith-Schuster touchdown on a Jet Sweep. It felt good to see the Steelers score a non-garbage time TD at Heinz Field again, but they were still down 9-7.

Failure on Fundamentals Catches Up with Steelers in 2nd Half

A two point half-time deficit does not an unscalable wall make, as Yoda might remind us. And when the visiting team goes up by nine with 20 minutes left to play, you are still very much in the game. But in the 2nd half injuries on defense conspired with failures on fundamentals on offense to do the Steelers in.

The Steelers defense has been a pass rushing juggernaut since 2015 at least. And if all of the pressure on the passer didn’t necessarily result in turnovers until recently, it kept opposing quarterback honest and at least helped limit long completions.

Cam Heyward, Alex Highsmith and Melvin Ingram made some fine plays, but in the end the Steelers defense couldn’t compensate for the loss of four starters as the Raiders exploited them for several deep gains including a 61 touchdown pass that saw Tre Norwood and James Pierre get torched.

The good news is that Najee Harris has proven he is a legitimate weapon for the Steelers. Its no coincidence that Pittsburgh’s first touchdown drive started with a 14 yard carry by Harris, and its second end zone encountered ended with a 25 yard catch and run that featured a twisting goal line dive by Harris.

Unfortunately, the Steelers offensive line couldn’t block well enough to make Harris a factor in the game. That forced Ben Roethlisberger to look deep. He found Chase Claypool on one occasion for 52 yards to set up Harris’ score, but he misfired on his other 3 attempts.

And there’s the rub.

After the game, Ben Roethlisberger took the blame, admitting that “I need to play better.” That’s true. To a degree.

But Ben can’t do it by himself anymore. Ben Roethlisberger has shown he can be a winning quarterback if he’s playing in a balanced offense. But until the Steelers can mount a competent running game, they will depend on pitching shut outs on defense.

And as today’s game shows, all it takes to neuter the Steelers defense is a few inopportune injuries.