Taken from the grade book of a teacher who fears that a lack of paper and pencils might scuttle the semester, here is the Steelers Report Card for the loss to the Raiders. 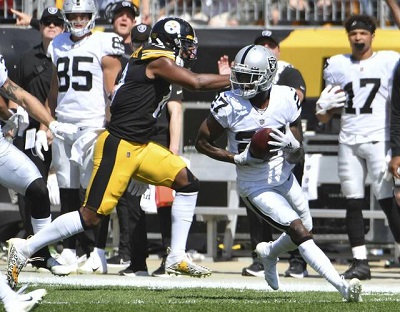 Quarterback
To his credit Ben Roethlisberger repeatedly took the blame for this loss. And it is true that his 40 for 27 for 295 yards and 1 touchdown and one interception hides the fact that too many of his deep throws were off. Roethlisberger is right, he does need to play better. But he has plenty of company. Grade: C

Running Backs
Najee Harris had 10 runs for 38 yards and 5 catches for 43 yards and a touchdown. Those numbers look pedestrian. And they are. But they’re not Harris’ fault. Outside of his 14 yard burst – which not coincidentally sparked the Steelers first touchdown drive – Harris had no room to run. Benny Snell had two carries for one yard. Grade: C+

Wide Receivers
Diontae Johnson lead the team with 9 catches for 105 yards including a 41 yarder that set up a score. But he also broke off a route way too early that lead to an interception. Chase Claypool had 3 catches including a 52 yarder that set up another touchdown. Still Claypool was targeted 6 more times to no avail. JuJu Smith-Schuster caught 6 of 7 passes thrown his way for 41 yards. Claypool and Johnson must go the extra mile to make plays for their quarterback. Grade: C+

Offensive Line
Where to start? Against the Raiders, the 2021 Steelers offensive line was the 2020, except with the good qualities stripped out. Run blocking was nonexistent and Ben Roethlisberger was hit 10 times including 2 sacks. To borrow on our opening metaphor, good line play is to quality offense as paper and pencils are to quality education. And the Steelers offensive line isn’t even showing up to school with their erasers.  Grade: F

Defensive Line
Cam Heyward was a one man wrecking crew breaking up passes and dropping players for losses in 3rd down doing more than you’d expect to make up for the loss of Tyson Alualu. Chris Wormley and Isaiahh Loudermilk didn’t put up a lot of stats, but the Raiders couldn’t run. Still, defensive line could have done more to make its presence felt in the pass rush. Grade: B-

Linebackers
For a while, it seemed like T.J. Watt might beat the Raiders all by himself, logging 3 tackles, a strip sack and a QB hit in a quarter of play. But then he got hurt. Melvin Ingram, Alex Highsmith, Robert Spillane and Joe Schobert all had their moments, but David Carr had too much time to throw in the first half. Grade: B- 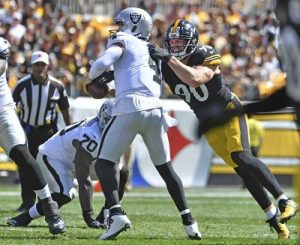 T.J. Watt strip sacks Derek Carr during the Steelers 26-17 loss to the Raiders on September 19th 2021 at Heinz Field in Pittsburgh.

Secondary
As Jim Wexell pointed out, on the critical play of the game, Minkah Fitzpatrick cheated up to the line of scrimmage Troy Poalmalu style in an attempt to shut down Darren Walker. Alas, the gambit failed, and Henry Ruggs streak through the secondary. Minhak Fitzpatrick tried to recover but fell short and Ahkello Witherspoon never had a chance.

The secondary, sans Joe Haden, and sans Devin Bush, T.J. Watt and Tyson Alualu in front of them held the Raiders in check for the first half. But the unit gave up two touchdowns in the 2nd half. Grade: D

Special Teams
Ray-Ray McCloud had a nice 15 yard punt return and 2 respectable kick returns. The Steelers kick coverage was solid, but they did give up more punt yardage than desirable. Grade: C+

Many fans and journalists want to make hay of Tomlin’s decision to punt on 4th and 1 with 9 minute left. But let’s be honest, the Steelers offense simply isn’t physical enough go for that one yard with any confidence.

(For those of you with long memories, think of Bill Cowher calling a fea-flicker on 4th and 1 vs. the Jaguars during the Dark Days of September 1999.)

On defense, Keith Butler kept the Steelers in the game with smart play in the first half, but his unit gave up one long drive, followed by a quick strike and then a field goal drive in the 2nd half. As for the offense, we glimpsed the potential of what Matt Canada can do on the two touchdown drives. But until the offensive line can muster the physicality to breathe live into those schemes, the Steelers will go no where. Grade: C-

Unsung Hero Award
Alas, it didn’t alter the outcome, but lining up for a 56 yarder at Heinz Field is never easy. Doing it when just under 4 minutes remaining and facing an 11 point deficit only adds to the fun. It was the longest kick in Heinz Field history and Chris Boswell not only made it, but he split the uprights. And for that he wins the Unsung Hero Award for the loss to the Raiders.