It sure was an ugly scene on Sunday, as the Steelers fell to the Raiders, 26-17, in a Week 2 clash at Heinz Field. 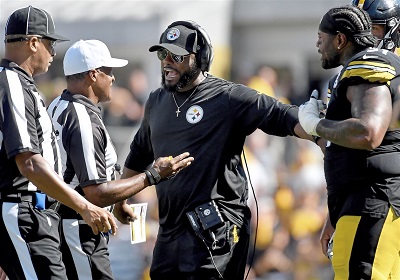 The Steelers injury situation on the defensive side was ugly–the team lost cornerback Joe Haden and linebacker Devin Bush to injuries before the game, as well as Tyson Alualu and T.J. Watt to ailments during it.

The defensive performance after said injuries was hideous–Raiders quarterback Derek Carr played like Kenny Stabler, particularly in the second half when he took advantage of Keith Butler‘s depleted unit and seemed to pass at will.

The offense was again pretty darn ugly–you can’t get any uglier than what the Steelers have been doing on that side of the ball for the first two games of the 2021 regular season.

It was an all-around ugly game, for sure, but at least the Steelers remained aggressive all afternoon, including linebacker Robert Spillane, who laid the wood a time or two while filling in for the injured Bush–he even drew a questionable unnecessary roughness penalty for a hard shot on Carr.

The offensive line, a beleaguered and embattled unit that is made up of mostly young guys who are trying to learn their crafts and become a part of a cohesive unit right before our very eyes, certainly was chippy on Sunday. Rookie center Kendrick Green didn’t seem to mind mixing it up with many Raiders defenders all day long.

Despite the loss, it was cool to see that so much intensity still exists between two traditional rivals whose most famous feuds took place in the 1970s.

Youngsters like Spillane and Green may one day become famous (or infamous) characters in the Steelers/Raiders mutual hatred, but it looks like veteran guard Trai Turner got indoctrinated into the rivalry two games into his Steelers’ career.

That’s right, following running back Najee Harris‘ 25-yard touchdown catch and run early in the fourth quarter, a play that brought Pittsburgh to within two points with 11:15 remaining, Turner was penalized for unsportsmanlike conduct. Raiders defender Marquel Lee was also penalized 15 yards, meaning the dead-ball fouls offset. No big deal, right? Only problem for Pittsburgh was that Turner was ejected, while Lee was not.

Why? CBS cameras soon revealed that Turner spat on Lee after charging through half his Steelers’ teammates to get in the face of the Las Vegas defender. Steelers head coach Mike Tomlin was incensed at the game-day officials and was demanding an explanation while also giving them an earful.

Turner has no defense–again, he can clearly be seen spitting in Lee’s face. But did you see how angry Turner was as he charged after Lee? What could Lee have done to anger Turner so much? According to Turner, he was only retaliating for Lee spitting on him first.

Do you believe Turner? I do. I mean, Lee plays for the Raiders. This is the same organization whose mantra used to be, “If you’re not cheating, you’re not trying.” Actually, that is probably still the Raiders’ mantra. Remember when George Atkinson sucker-punched Steelers receiver Lynn Swann away from the play in a game between the two teams back in the 1970s? Whether you remember it or not, it happened. Chuck Noll was even sued by Atkinson after the legendary head coach accused the defensive back of being part of the criminal element of the NFL.

I’m not saying the Steelers are innocent; they’ve obviously had their share of maniacs who have contributed to this 50-year rivalry between the black and gold and the silver and black. What I’m saying is that Lee likely spat first and deserves just as much of the public flogging as Turner has been on the receiving end of since Sunday.

Anyway, I don’t want to get into the Immaculate Reception or anything like that–Lord knows that gets brought up every time the two teams meet–but isn’t it nice to see that this rivalry is still so down and dirty after all of these years?

Maybe these two proud organizations will do it right and finally meet up in the postseason again.

That’s when the real spit (and blood and punches) will start flying.