Taken from the grade book of a teacher who was just as truant as the offense during the season’s first month, here is the Report Card from the Steelers win over the Broncos. 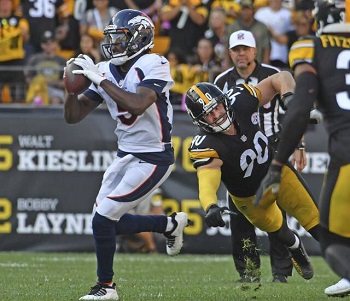 Quarterback
Ben Roethlisberger went 15-25 for 253 yards two touchdowns and no interceptions in what was easily is biggest day of the season. Yes, Ben Roethlisberger had 3 “almost interceptions” but he was right on the money with his two touchdown strikes as well as the deep balls that set up the rushing touchdown. But Ben put the ball on the ground, which brings his grade down. Grade: B

Running Backs
Najee Harris ran for 122 yards and a touchdown on 23 carries and caught 2 passes for 20 more. Harris exploited holes and moved piles forward. Benny Snell dropped a pass early on and found himself on the bench, but ran hard when Harris had to leave with cramps. Kalen Ballage got several carries but had no yardage to show for it. Grade: A-

Tight Ends
All three tight ends got involved in the passing game as Pat Freiermuth and Eric Ebron caught two passes a piece while Zach Gentry caught another that set off a scoring drive. The run blocking was improved, the tight ends helped with. Grade: B-

Wide Receivers
Chase Claypool owned the Broncos, burning them for 130 yards on 5 catches and a touchdown. Diontae Johnson opened the scoring with a 50 yard scamper and had one other catch for 22 yards. JuJu Smith-Schuster had two carries for 3 yards and no catches before leaving the game with a season ending shoulder injury. Ray-Ray McCloud only had one catch, but made an interception saving hit. Grade: A-

Offensive Line
After spending a month mired in a morass of something worse that mediocrity the offensive line turned in a fine performance. Ben Roethlisberger was only sacked once and only hit on one other occasion. What’s more, he had time to throw all afternoon long. Najee Harris also had plenty of room to run. This unit must continue to improve, but if it does a lot of other good things can happen. Grade: B

Defensive Line
Javonte Williams and Melvin Gordon III might not be the NFL’s 2021 equivalent of Franco and Rocky, but they’re a solid duo. Williams torched the Steelers for a 49 yard game, but that was the lone highlight of the Denver rushing attack. That starts with the line who had a solid day including Henry Mondeaux who got his first sack.

Linebackers
As The Athletic’s Mark Kaboly pointed out, you didn’t hear Joe Schobert’s name much, although he did register 5 tackles, and that’s because he was doing his job in the middle of the field. Devin Bush had the lone sack of linebackers against a Denver time that was max protecting, while T.J. Watt did work in two pressures. A solid afternoon for the linebackers. Grade: B+

Secondary
Minkah Fitzpatrick led the team with 10 tackles and was disruptive all over the field. But the real hero of the group is James Pierre. Pierre stopped a would-be touchdown in the first half by coming from behind to tackle Javonte Williams. His interception saved another touchdown and sealed the game. Yes, he gave up a touchdown and a long gain before that, but the ability to bounce back is critical sign of a quality cornerback. Joe Haden and Terrell Edmunds had passes defensed, quietly logging solid games. Grade: A-

Special Teams
Chris Boswell made field goals of 48 and 43 yards and was 3-3 on PATs – that’s 9 points in an 8 point game for those of you at home. Ray-Ray McCloud’s kick returns were average at best and the Steelers kick coverage was sound. After getting called out by Tony Defeo, Pressley Harvin III responded with his best day punting, including a 63 yarder late in the game. Grade: B

Coaching
The Denver Broncos came into the game with one of the NFL’s top defenses, yet Matt Canada managed to piece together a game plan that saw the Steelers score early and add to that lead all while controlling the clock.

One defense Keith Butler was missing Cam Sutton and rather than put the job of replacing him on one person, he managed to divide the load and do it effectively. The fact that the Steelers went 1-3 on fourth downs is a bit disturbing, but the unit delivered when the game was on the line. 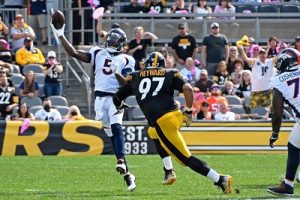 Three game losing streaks are ugly in their very essence in the NFL. And any the pressure to hit the “panic” button is tremendous, even if a coach denies it. Mike Tomlin refused to do that, and continued to trust in his men and his methodology and that trust paid off. Grade: B+

Unsung Hero Award
The stat sheet tells us that he might not have made any “Splash” plays. But 4 of the 5 figures on his stat line directly correlate to scuttled drives and for that Cam Heyward wins the Unsung Hero Award for the win over the Broncos.