“Tragic” and “Devastating” are just two of the words that JuJu Smith-Schuster‘s the season-ending injury evokes. There’s another word which isn’t being bandied about but probably should be: Unsurprising. 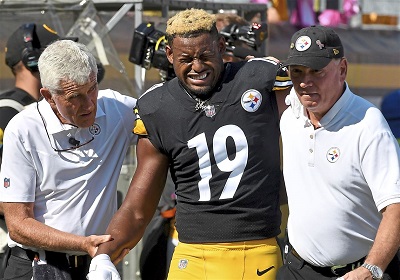 “Betting against the house” in this case has nothing to do with wagers or gambling (sorry if some point-spread-focused Google search led you here) but it does have everything to do with trying to oppose the odds.

On the one hand you have men and women who make decisions that alter destinies of themselves and others for good or for ill. Yet at other times, historical forces conspire to move people in directions they had no intention of following.

In football, owners, general managers, coaches and players all have the power to make choices that shape history.

In the late ‘60s Art Rooney Sr. chose to give control of the Steelers to Dan Rooney, who hired Bill Nunn Jr., who hired Chuck Noll, who drafted Joe Greene, Mel Blount, Terry Bradshaw and Franco Harris and, well, if you’re reading this you know how that story ends.

In the NFL, the winds of history blow against the best decision makers from varied directions, but the most common angles it takes are age, injury and the salary cap.

For an easy example, think back to the Steelers November 2014 game against the New Orleans Saints. The game was hailed as the reunion of the “4 War Horses” – Troy Polamalu, James Harrison, Ike Taylor and Brett Keisel.

But what happened? Brett Keisel suffered a career-ending injury that afternoon, Ike Taylor struggled so badly that he benched himself the following week, and Troy Polamalu only had four games games left in him. The “4 War Horses” was quickly reduced to James Harrison, the Lone Ranger.

There were even a few pleasant surprises! Vince Williams was a cap casualty who decided to return at a hometown discount. Tyson Alualu agreed to terms with the Jaguars, got COVID and had to stay in Pittsburgh, then reupped with the Steelers. And of course JuJu Smith-Schuster didn’t get the offer he felt he deserved and he too returned.

But what happened next reminds me of the introduction to Raisin in the Sun. In finishing her description of the Younger living room Lorraine Hansberry concludes:

And here a table or a chair has been moved to disguise the worn places in the carpet; but the carpet has fought back by showing its weariness, with depressing uniformity, elsewhere on its surface.

Similar forces are working their will on the Steelers roster.

Yes, Kevin Colbert moved plenty of contract numbers around to hide the holes the salary cap created in the Steelers’ roster, but five games into the season, the roster is already showing its weariness.