Taken from the gradebook of a teacher worried his students are falling into the nasty habit of doing things at the last minute, here is the Steelers Report Card for the win over the Seahawks. 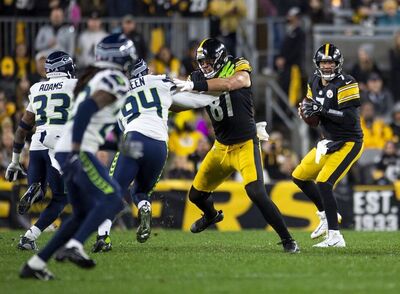 Quarterback
Shaky. On the surface Ben Roethlisberger’s 29-40-229-1 look solid. And to his credit, he moved the offense in the first half when the running game was stalled. But in the 2nd half the offense netted 2 field goals in regulation. All of those stalled drives are not Roethlisberger’s fault, but he couldn’t close the game in regulation or in overtime. HE also put the ball on the ground. Again. Grade: C

Running Backs
Najee Harris ran for 81 yards on 24 carries for a 3.4 average. Kalen Ballage tacked on 2 for 15 including an 11 yarder when the Steelers needed it. The exciting thing about Harris’ performance isn’t in the numbers, its in how he made those numbers. He got stronger as the night wore on. That’s what the great ones do. Grade: B+

Tight End
Pat Freiermuth caught 7 of 7 passes thrown his way and his impact on the Steelers offense deepens week-to-week. That has come a bit at the expense of Eric Ebron, but Ebron converted a 3rd down and ran for a touchdown. Zach Gentry was on the field for about 1/3 of the time as a blocker and did his job well. Grade: B+

Wide Receiver
That Diontae Johnson would author the group’s best play with a 25 yard field-flipping run is a bit telling. Johnson caught 9 of the 13 balls thrown his way compared to the 2 of 7 hauled in by Chase Claypool. IT is true that in several cases, Ben Roetlisberger didn’t deliver the ball accurately enough to expect a catch. But its also true that where were times when both wide outs needed to make a play and didn’t. James Washington had one catch for 9 yards then disappeared, while Ray-Ray McCloud had 2 catches for 12 yards. Grade: C- 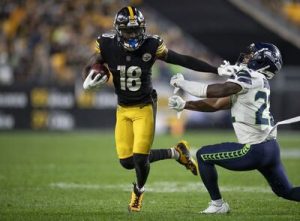 Offensive Line
The offensive line continues to grow. Ben Roethlisberger was only sacked once and only hit one other time. More importantly, the running game got better as the night wore on – a clear sign that the offensive line was winning the battles up front. Grade: B

Defensive Line
Alex Collins ran for 100 yards in just over 1 half and made it look easy. That’s not all on the line, but it starts there. The Steelers are clearly missing Tyson Alualu. Nonetheless, Cam Heyward had an outstanding night, pulling the grade up for the group. Grade: B-

Linebackers
T.J. Watt did nothing less than take over the game in over time. Devin Bush had a shaky night, including his initial return of the ball the wrong way, but scooping up a fumble in OT is always critical. Tackling was a chronic problem in the 2nd half, and that brings the linebacker’s grade down. Grade: B+

Secondary
For the second straight week, James Pierre ended regulation with a splash play. The secondary shut down Geno Smith in the first half, yet they took struggled with poor talking. Tre Norwood came up big on third down a few times. Grade: C

Special Teams
The Steelers gave up a 38 yard kickoff return which set up the Seahawks 2nd touchdown and got them back in the game. Ray-Ray McCloud turned in a 37 yard punt of his own on the opening kickoff but regressed after that. The real story once again was Chris Boswell going 3-3 on field goals including a 52 yarder. Grade: B

Coaching
Matt Canada’s offense continues to move in the right direction. Certainly, the Steelers weren’t going up against the ’85 Bears defense, but the unit committed to establishing the run, and that commitment paid dividends late in the game.

While that is not good, Keith Butler’s boys were able to shut out the run late in the game when it counted, effectively forcing Geno Smith. It oversimplifies things to say that overtime was a 1-1 between Geno Smith and T.J. Watt, but Watt clearly vanquished the backup quarterback. 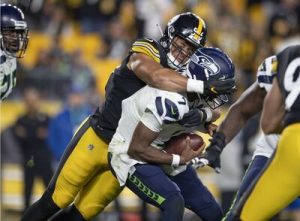 The Steelers have a young team that is finding its way, and this group of men responded to adversity with authoritative playmaking while the game was on the line, which is to Mike Tomlin’s credit. Grade: B

Unsung Hero Award
His counterpart on the other side is getting the ink, and deservedly so, but helped seal the edge on several rushing plays and he registered two sacks on third down, the second of which came in the Red Zone during the 4th quarter that forced a field goal and for that Alex Highsmith wins Unsung Hero honors for the Steelers win over the Seahawks.