Sports fans love to talk in absolutes. Sportswriters do as well.

For example, did you know the Steelers absolutely would have defeated the Oakland Raiders in the 1976 AFC title game if not for the injuries sustained by Franco Harris and Rocky Bleier? Also, Pittsburgh would have won many more Super Bowls in the 1980s and 1990s had the organization selected quarterback Dan Marino in the first round of the 1983 NFL Draft.

Do you think either of the above scenarios would have actually taken place had history been different? We’ll never know, but a different history certainly wouldn’t have hurt the Steelers’ cause.

As it pertains to the Steelers of the present–or at least their most-immediately past–there is no doubt in my mind that they would have won Sunday’s game — a contest against the lowly Detroit Lions that ended in a 16-16 tie in overtime at Heinz Field – had their kicker, Chris Boswell, but given at least one chance to attempt a field goal from 50-plus yards away. 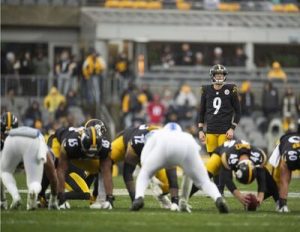 Chris Boswell would have made it in OT. Photo Credit: Karl Roser, Steelers.com

It may have seemed risky to trot Boswell out there after a 39-yard hookup to Diontae Johnson on Pittsburgh’s first possession of overtime to attempt a 59-yard field goal, but it may not have been as risky as allowing the offense to attempt to get the job done. Unfortunately, Johnson fumbled on that play (see what I mean?) and denied the Steelers and their fans the opportunity to find out.

I absolutely would have sent Boswell out to attempt a 57-yard field goal the moment Johnson was tackled at the Detroit 39-yard line on Pittsburgh’s final possession of overtime. There were mere seconds left, the Steelers had no timeouts, and any pass that ended with a tackle in bounds would have made for a frantic attempt for Boswell.

The Steelers thought otherwise and, instead, attempted one final pass, which rookie tight end Pat Freiermuth pulled in for a one-yard gain before quickly fumbling the last shot at winning right down the tubes.

He’s starting to nail 50-plus yard field goals like one sinks two-foot putts–consistently if you’re a good golfer. In fact, he’s six-for-six from that range in 2021 and hit one from 51-yards away late in regulation on Sunday, in the rain, in the cold, at Heinz Field.

Just six days prior, in Pittsburgh’s come-from-behind win over the Bears on Monday Night Football, Boswell, who kicked the game-winner from 40 yards out, connected on field goals of 54 and 52 yards earlier in the night, becoming the first kicker to ever hit two from 50-plus yards in the same game at Heinz Field.

Other than T.J. Watt, Boswell might be the most reliable Steeler at this point, and when you really think about it, he’s been reliable his entire career. I don’t know what was going on with Boswell in 2018 when he missed seven of 20 field-goal tries while also missing five extra points, but even with those seven field-goal misses, Boswell has made 164 field goals in 185 tries during his Steelers career.

Amazing. Furthermore, Boswell is 15 of 18 from 50-plus yards out since signing with Pittsburgh early in the 2015 campaign.

Obviously, neither Johnson nor Freiermuth intended to fumble in overtime on Sunday, so it’s hard to blame effort or even strategy–even if I do think the final pass to Freiermuth was a poor call and/or poorly executed.

It’s just a shame that Boswell wasn’t given a chance to boot home the win.

I have no doubt that he would have.