Rumor has it, this is Steelers quarterback Ben Roethlisberger‘s final season with the team and presumably in the National Football League.

That’s actually been the assumption since Roethlisberger agreed to take a pay cut last spring in order to stay with the team for the 2021 regular season. 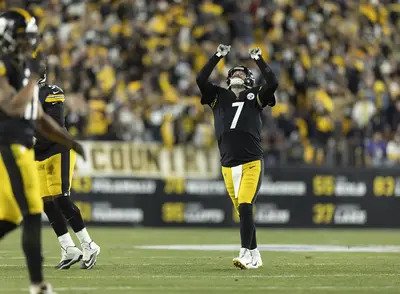 Many wanted Roethlisberger gone after the 2020 regular season. In fact, when he was seen crying at the end of that depressing 48-37 loss to the Browns in the AFC wildcard game at Heinz Field on January 10, the belief was that those were tears of finality, of closure, of the realization that the final seconds of Roethlisberger’s Hall of Fame career were ticking away.

Honestly, nobody can say what was going through Roethlisberger’s head at that moment. Perhaps he really did think that might have been it for him. Maybe he was crying over what he assumed would be the final game for his long-time center, the great Maurkice Pouncey, who was seen commiserating with Roethlisberger at the close of that postseason debacle.

Perhaps, like most Steelers fans everywhere, Roethlisberger was simply showing his disappointment over the finality of what once looked like a magical 2020 Steelers campaign, one that saw the team get out to a franchise-record 11-0 start. Of course, we all know how the 2020 regular season began to spiral out of control last December and didn’t stop spiraling until Pittsburgh was one and done in the playoffs.

Looking back on last year, it really was bizarre, wasn’t it?

Thanks to the worldwide COVID-19 pandemic, the vast majority of NFL stadiums were empty for actual games last year. It was such a sterile environment, one that most players, coaches and even the fans watching on television had little choice but to adapt to. But now that I’ve had a chance to revisit last year,

And for that reason, I’m glad Roethlisberger decided to come back for this presumed final season as an NFL quarterback. It might seem corny, but he needed to feel the love of the fans one last time. He needed to hear the cheers and experience the tears, not just from himself but from the faithful that have watched him do his thing since the Steelers 2004 season.

There are fans in their 20s who have never known another Steelers quarterback other than Roethlisberger. They don’t remember all the mediocre ones that came along after Terry Bradshaw. Heck, they might not even know or care one bit about Bradshaw and his legacy.

Most importantly, Roethlisberger needed to hear the roar of those folks as he ran out of the tunnel at Heinz Field. Can you imagine your last time out of your home tunnel being met with dead silence thanks to a pandemic? You talk about a truly surreal end to a career.

With four games left to go in the 2021 regular season, it remains to be seen how Ben Roethlisberger’s career will end with the Steelers.