Taken from the grade book of a disappointed teacher who hopes his students learn from this by following the right leader, here is the Steelers Report Card for the Thursday Night Football failed comeback against the Vikings. 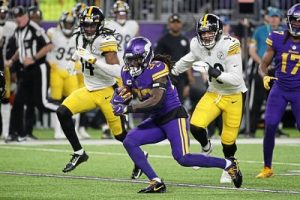 Not good when your safety and inside linebacker are looking at the running back’s number…. Photo Credit: Karl Roser, Steelers.com

Quarterback
Ben Roethlisberger took some vicious hits and endured high, erratic snaps to lead a rally that put 28 points on the board in 17 minutes. In doing so he went 28 of 40 for 3 touchdowns and one interception for 308 yards. His final pass was perhaps one of the best he’s ever thrown. Grade: A

Running Backs
Early on their was so little room to run that Troy Aikman credited Najee Harris with the “best 3 yard run in history.” But Harris was excellent on the night, going 94 yards on 20 carries and catching two 3 passes, while running and catching a touchdown. Benny Snell had one carry for -2 yards. Grade: A

Tight Ends
Pat Freiermuth caught 2 passes for 32 yards plus a two point conversion, but dropped an incredibly difficult one on the game’s final play. The tight ends could do more in the blocking game. Grade: C

Wide Receivers
Diontae Johnson bailed on a throw that got intercepted. But he atoned by catching a field-flipping 37 yard pass. Later, he had incredible presence of mind to get out of bounds to set up the final throw. Such efforts were necessary due to his counter part. Chase Claypool’s taunting penalty was bad. The catches he made on the final drive were fantastic. But his post-4th down conversion pose was inexcusable, costing the Steelers at least 1 play. Ray-Ray McCloud caught 6 of 8 balls thrown to him. Grade: C+

Offensive Line
Yes, the line protected Ben better in the second half. Yes, it opened up hole in the running game. But pass protection the Steelers suffered in the first half hasn’t been so bad, since… The Steelers loss to the Vikings in London. Better play in garbage time neither excuses nor negates the offensive line getting manhandled during the game’s first 40 minutes. Grade: F

Defensive Line
Cam Heyward played well, everyone else did not. Grade: F

Secondary
Believe it or not, Minkah Fitzpatrick and Terrell Edmunds actually stopped Cook from doing even more damage and Minkah came up big on several third downs. Cam Sutton got burned on the Vikings last touchdown pass. Ahkello Witherspoon had two interceptions and knocked away 3 passes. Grade: B-

Special Teams
Chris Boswell’s missed extra point might be a footnote, but it is a footnote that put the Steelers in the position of needing two-point conversions to get ahead once something got going. Pressley Harvin III had a few OK punts, but laid several eggs. Kick coverage was OK as were Ray-Ray McCloud’s returns. Special teams could have been a positive difference. It wasn’t. Grade: D

Coaching
Getting a team ready to play on the road on Thursday night is hard. It is even harder after an intense, emotional win over a division rival. And it says here that the Steeler core problems lie with talent, rather than coaching or schemes.

Not even close. Matt Canada’s offense was steamrolled by the Vikings defense for the game’s first 40 minutes or so. They punted 5 times and turned over the ball before putting a single point on the board.

At first, efforts against the run were erratic. Then teams exploited them a little more. Then that exploitation became systematic. Against the Vikings it became choric as Dalvin Cook ran like some combination of Barry Sanders, Jim Brown and Walter Payton in their primes.

Yes, the Steelers defense made key stops in the 2nd half, but as Mike Tomlin acknowledged, that is easier to do against a team has a 29 point lead. 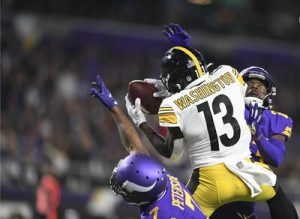 The Steelers showed a lot of heart in the second half rally. But we can’t and won’t credit to coaches for that. The men were responding to Ben Roethlisberger’s leadership, and it is up to the coaches to ensure they follow his example, and not that of the Chase Claypools on the team. Grade: F

Unsung Hero Award
This man’s season and in fact entire Steelers career has been a bit of a disappointment. But if you look at the Steelers rally, it started with a 29 yard pass that bring Pittsburgh into Minnesota territory. Then he drew a taunting penalty in a 2 yard loss. Then the player had an 8 yard pass that set the Steelers up at the 2. Later he caught a 30 yard touchdown pass. And for those efforts, James Washington win Unsung Hero honors for the loss to Minnesota.