“But that ain’t what y’all want. What y’all want to do is show up, and y’all want to live on the backs of legends. Don’t nobody care about that no more. Young people aren’t respectful to the past. In the past, Pittsburgh was something. This Pittsburgh defense ain’t jack.”

Those quotes, courtesy of Fox News, are all from the same person, former Steelers safety Ryan Clark, during a rant on Monday while making an appearance with his current employer, ESPN. 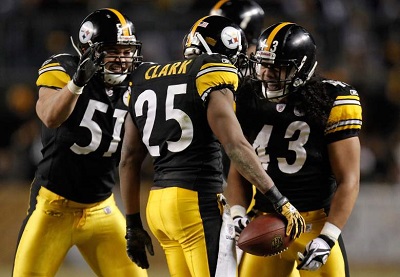 Clark, a member of the Steelers Super Bowl XLIII team, a championship team that was spurred on by one of the most dominant defenses in the history of the NFL (Dick LeBeau‘s unit finished number one in just about every important category in 2008), was upset about the performance of Keith Butler‘s 2021 version, a version that has allowed 586 rushing yards over the past three games (the Steelers have lost two of those games and had to settle for a tie against the pitiful Lions in the other).

Clark isn’t the only former Steelers defensive player to chime in on the struggles of the current defense. Former linebacker Arthur Moats has been very critically, especially of the effort put forth by linebacker Devin Bush: “Your tape is going to tell me everything I need to know so don’t tell me you want to make plays when I cut the tape on you, you’re not showing that effort.”

I realize that Bush has come under the microscope with the media and fans because of his lack of productivity this year, but Moats’ comments had to cut deep like a surgical procedure with no anesthesia.

It’s easy for us to just arbitrarily proclaim that a player isn’t putting forth the effort, but when a former player, an actual expert, accuses you of that, again, ouch!

Of course, former Steelers, especially former Super Bowl heroes like Ryan Clark, expressing strong opinions about the team’s defensive struggles is nothing new. In fact, I think the most famous quote from an old legend about such things came from Dwight White, a four-time Lombardi winner and member of the famed Steel Curtain defenses of the 1970s, once famously (or infamously) described Pittsburgh’s mediocre defense of the mid-’80s as “Soft and cheesy.“

Guys like Clark, Moats and White know a thing or two because they’ve seen a thing or two, especially Clark and White who, again, played on some of the best defenses in the history of the NFL.

It can’t be easy for a former player to sit back and watch a unit that he once helped to make legendary, intimidating and dominant regress into something that wouldn’t put fear into a high school team’s offense.

It has to be especially frustrating to watch the 2021 unit because, despite the injuries, there should be more than enough star power to still be quite effective. Unfortunately, Pittsburgh’s unit, one that was hovering around the top 10 in total yards fairly recently, has dropped to 21st in that category.

Also, a defense that was one of the more opportunistic units in the NFL the past two seasons has just 10 takeaways in 11 games. Heck, even the pass rush, the hallmark of the defense–the entire team, really–since the second half of the 2016 campaign, is having a down year and is on pace for just 37 sacks–and that’s with an extra regular-season game.

What has happened to the Steelers defense in 2021? It can’t be just about the injuries; if it is, guys like Stephon Tuitt and Tyson Alualu deserve a lot more money than what they’re currently earning. If it’s indeed about attitude, want to and being on the details, well, the unit better figure things out and quick.

Former players aren’t just watching, they care deeply. And when a legend like Ryan Clark, one of the most charismatic and vocal former NFL players currently working in television, puts you on blast, he isn’t going to turn the volume down until you get it right.