Taken from the grade book of a teacher who understands all too well that his students passed by guessing right on a multiple choice test, here is the Steelers Report card for the win over the Titans. 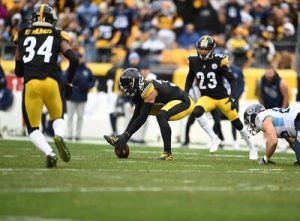 Quarterback
Ben Roethlisberger went 16 for 25 for an economical 148 yards and no touchdowns and no interceptions. He also rushed for one touchdown. Roethlisberger faced a lot of pressure and the running game was AOWL. The Steelers transformed 4 turnovers into 12 points. If this was Ben’s penultimate game at Heinz Field, he didn’t go out with a bang. Grade: C+

Running Backs
There have been days when Najee Harris hasn’t had good rushing numbers but got good grades nonetheless. The Titans game is not one of those. Harris had no room to run, what else is new, but made bad decisions and lacked the flash that he’s shown thus far this season. Grade: D

Tight Ends
Pat Freiermuth had 4 catches but as usual made each of them count until leaving with a concussion. Zach Gentry had a 17 yard catch on the Steelers touchdown drive, Pittsburgh’s 2nd longest pass of the game. Grade: B

Wide Receivers
Diontae Johnson led the Steelers with 5 catches for… 38 yards. No, that’s no misprint. James Washington had 3 catches for 36 yards although his 19 yard grab came in garbage time. Chase Claypool had one rush for 12 yards that was credited as a reception even if he’s listed as having zero receptions. Yep, it was that kind of game folks. Grade: D

Offensive Line
The Steelers feature back averaged 1.5 yards per carry. Ben Roethlisberger was sacked 3 times and hit another three times. The Steelers offensive line is what it is, and “is” is terrible. Grade: F

Defensive Line
Whew. The Titans “only” ran for just over 200 yards and “only” averaged 4.8 yards a carry. Chris Wormley did have a sack on the Titans opening possession and Cam Heyward’s half sack did force a field goal and take 4 points off the board. Grade: D

Linebackers
T.J. Watt had a sack and a half and both were impact plays. Devin Bush had a deflected pass which he could have and should have intercepted. He continued to be blocked in run coverage. Joe Schobert intercepted a pass deflected by Taco Charlton. Grade: C

Secondary
Minkah Fitzpatrick recovered a fumble caused by Arthur Maulet that set up the first score. Joe Haden was the game’s MVP recovering a fumble caused by Cam Sutton and icing the game with a textbook tackle on 4th down. Grade: B

Special Teams
Ray-Ray McCloud did a decent job returning punts and his kick returns were OK. Punt return coverage was awful, at one point giving up a 55 yard return. That 55 yard return came after Pressley Harvin III’s 51 yarder which was an outlier as Harvin “booted” punts of 27 and 32 yards (his other punts were either OK or well-placed.) More consistency is needed.

Coaching
The Titans have a talented defense, no doubt and the Steelers offense has its liabilities. Still, Matt Canada’s offense accomplished nothing, outside of a lone touchdown drive. No sticking with the rush until Harris ground out yards, no Jet Motions, no no-huddle. Given four turnovers and quality field position, the Steelers offense should have come away with more than 12 points. 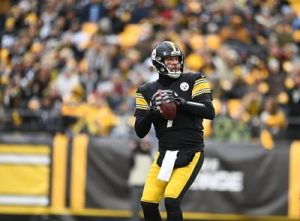 It is true that the Steelers effort on defense had more to do with stars like T.J. Watt and Joe Haden making or taking advantage of big opportunities than scheme or out executing your opponents. But it is also true that before the turnover carnival began, the Steelers were only down 10 points.

Overall, the 2021 Pittsburgh Steelers roster is one that features a number of All Pro caliber men playing along side either green rookies or retreads that are, at best, roster-bubble babies on any other NFL team.

The fact that playoffs remain a possibility this late in December is a credit to Mike Tomlin. Grade: C

Unsung Hero Award
He’s maligned by both fans and the professional press alike and has been since the day he was drafted. And if he hasn’t lived up to his draft position he’s been consistent since arriving in Pittsburgh and he’s also been delivering steady play under the radar. Against the Titans he made a couple of critical plays behind the line of scrimmage and for that Terrell Edmunds is the Unsung Hero of the week.