The record will reflect that the Ben Roethlisberger Era ended with the Kansas City Chiefs 42-21 win over the Pittsburgh Steelers in the AFC Wild Card at Arrowhead Stadium on January 16th 2022.

IF the 2021 Steelers’ erratic nature led to eerie feelings about the franchise’s future, the Ben Roethlisberger era appeared destined to end on a bright note. The emotional farewell at Heinz Field against the Browns, the comeback win over the Ravens on the road and the surprise playoff slot all seemed to be building up to something.

The 2021 Steelers believed in themselves. JuJu Smith-Schuster came off of IR adding his momentum. Surely, even if the Steelers couldn’t upset the Chiefs, they’d take Kansas City to the wire, perhaps just falling short on the final play, Friday Night Lights fashion.

That didn’t happen because as the game unfolded, it became clear that adrenaline and not belief was the Steelers secret weapon, and when the adrenaline wore off, the Chiefs’ superior talent took over. And it wasn’t pretty. 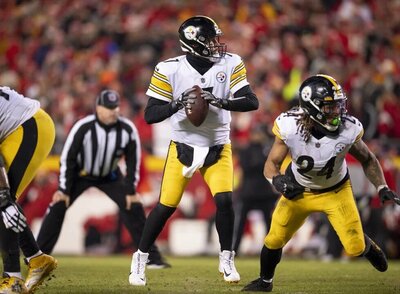 Steelers Start with Intensity Worthy of a Playoff Team

On the Chiefs first series the Steelers forced a punt. Cam Sutton blew up a screen to Mecole Hardman for a loss and Tre Norwood followed by breaking up a pass to Travis Kelce. On the second series Chris Wormley broke up another pass headed Travis Kelce’s way, while Minkah Fitzpatrick stopped Byron Pringle a cold yard short of the 1st down marker, leading to another punt.

Really, if players like Wormley and Norwood could make plays in what Mike Tomlin calls “Situational football” alongside the likes of Minkah and the Cams, the Steelers’ defense could hang with the almighty Chiefs, right? 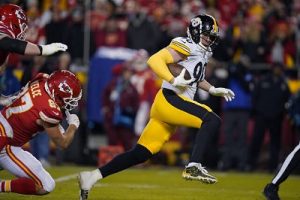 T.J. Watt returns a fumble for a touchdown. Photo Credit: AP, via Tribune-Review.

On the next series, the heavy hitters got into the act, with T.J. Watt tipping a pass which Devin Bush intercepted and returned 10 yards. Sure, the Steelers offense could only do what it had already done all night – punt.

But it didn’t matter. Tacho Charlton and Tre Norwood made key stops to force yet another Chiefs punt as the 1st quarter ended. As the second quarter began, the Steelers offense showed some shades of life – it advanced 20 yards before punting. The defense took its cue.

Cam Heyward forced a fumble which T.J. Watt recovered and returned 26 yards for a touchdown as the Steel Curtain seemed poised to rise….

Mahomes answered with a touchdown drive, that included a 23-yard scramble and some devilishly clever trickery to use T.J. Watt’s aggressiveness against him. Less than a minute later he was at it again, this time taking the Chiefs into the Red Zone and scoring just under the two-minute mark.

Did the Kansas City Chiefs show that their offense is better than the Steeler defense during those final five minutes of the first half? Yes, it did, but during the same time span the Steelers’ offense showed it had no business being in the playoffs.

Diontae Johnson couldn’t hold on to a 2-yard pass on 3rd and 2. Ben Roethlisberger badly misfired on a deep pass to Chase Claypool. The two failed to connect another time deep, but it wasn’t clear whether the quarterback or wide out was at fault. Perhaps it was both.

One of the few bright spots of the Steelers’ 2021 offense has been Najee Harris. Except for a few games in October, Harris has been basically on his own, rushing the ball with no blocking support and getting hit in the backfield more often than not.

Despite that, he rushed for 1200 yards with a 3.9 yard-per-carry average that doesn’t even hint at how hard he had to work to earn those yards. He also caught 74 passes in the air, doing plenty of damage there.

So when the Chiefs opened the second half by taking took the half opening kickoff and driving 68 yards for yet another touchdown (this time on Nick Allegretti tackle eligible play) the safest player the Steelers could look to was Najee Harris.

He touched the ball 381 times in the regular season without a single fumble. Ben Roethlisberger hit Harris with a pass to start the Steelers 2nd half possession, Willie Gay hit him, Harris fumbled, Frank Clark recovered for the Chiefs, and two plays later Tyreek Hill romped 31 yards for a touchdown.

Any chance the Steelers had of making a comeback ended then.

Roethlisberger Finishes Fighting to the End

Down 35-7 in a playoff game is a grim place to be. But you wouldn’t have known that by the way the Steeler offense responded. For whatever else you want to say about them, and you can say a lot, this group showed no quit. 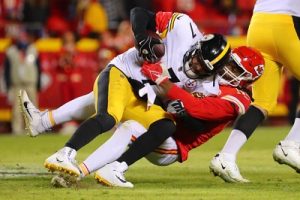 Working in the no huddle, Ben Roethlisberger completed 7 straight passes to Claypool, Harris, Smith-Schuster and Pat Freiermuth before finding James Washington for a toe tapping, combat catch for a touchdown.

The Chiefs added another touchdown, and Roethlisberger responded again. This one featured some incompletions as well as an interception that was nullified by a roughing-the-passer call. It also saw Benny Snell make the most of his shot at garbage time glory. After converting a 4th and 2, Diontae Johnson caught another Roethlisberger pass for a touchdown.

The Steelers actually forced the Chiefs to punt thanks to a T.J. Watt sack, giving Ben Roethlisberger one last drive. He made the most of it, converting 3 third downs, taking advantage of the underneath routes to Benny Snell and Ray-Ray McCloud that the Chiefs were giving him.

Finally, with 11 seconds left to go and no time outs, Ben Roethlisberger hit Zach Gentry for an 11- yard pass that would see Gentry tackled 3 yards short of the goal, ending the game.

Ben Roethlisberger ended his career by giving his all to the very last second. What a fitting farewell.