The moment has arrived. It is time for Ben Roethlisberger to retire and being his “Life’s Work.”

Roethlisberger taking a knee to close Steelers 26-14 win on Monday Night Football over the Cleveland Browns couldn’t have been a more picture perfect ending for his time in Pittsburgh. But Big Ben is set to strike midnight in Baltimore, not in Pittsburgh. Which is also perfect. 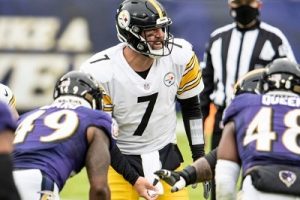 His next pass was intended for Hines Ward, but got picked off by Adalius Thomas and his last pass on the as the afternoon would end with a 30 to 13 decision in Baltimore’s favor. But that was the last time Ben Roethlisberger would lose in his rookie year until the AFC Championship.

Since that day Ben Roethlisberger has played in Baltimore 11 more times, having missed a surprising number of games due to injury or sitting out season finales.

But going into the final game of his career, Roethlisberger’s record in Baltimore is 5-6. Roethlisberger didn’t win his first game in Charm City until 2008, the year the Steelers won Super Bowl XLIII. And although he’s had some rough sledding and a few embarrassing losses in Baltimore, Ben hasn’t lost there since 2016.

Ben Roethlisberger has owned the AFC North for 18 years. For a long time he was the winningest quarterback in Cleveland since the Browns return to the NFL in 1999 and he’s done quite well in Paul Brown Stadium.

Let’s do it Ben! Let’s close with one last win over the Ravens in Baltimore to officially go out King of the North!