Scratch one more from the “Bill Cowher Coaching Tree.” After a 4-12 inaugural campaign the Houston Texans have fired head coach David Culley. Cully’s roots to Pennsylvania run deep but they are decidedly shallow on the Pittsburgh side. 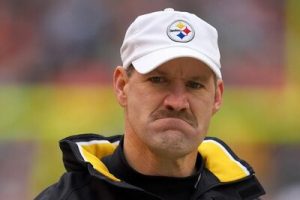 David Culley served in that capacity from 1996 to 1998, and this was hardly the golden age of Steelers wide receivers. Yes, Yancey Thigpen flourished during the Steelers 1997 season, but his tenure is more notable for the failed development of Charles Johnson, Will Blackwell and to a lesser extent Jahine Arnold.

Charles Johnson was a first round pick, Will Blackwell a second and Arnold a 4th. Bill Cowher and Tom Donahoe put together some good drafts early on, but as communication broke down between the two, the Steelers misfires on draft day became more severe — these three flameouts at wide receiver aren’t even the most egregious example.

After leaving Pittsburgh, Culley hopped on the Turnpike to Philadelphia, where he spent several years on the staff of Andy Reid, before following Reid to Kansas City, and then going on Buffalo and Baltimore. A year ago the Houston Texans hired him, and today he is without a job.

I don’t follow the Houston Texans so I can’t comment on Culley’s performance, but pulling the plug on a coach after one season seems a bit harsh. But fair or not, it makes Culley the latest former assistant of Bill Cowher to fail as a head coach.

Dom Capers was Cowher’s first assistant to get a head coaching job, and was followed by Chan Gailey, Jim Haslett, Dick LeBeau (indirectly), Mike Mularkey, Marv Lewis, and Ken Whisenhunt. All of them had their moments with Whisenhunt coaching against the Steelers in Super Bowl XLIII, but none of them could sustain success.

And while critics might seek to use that as ammunition against Bill Cowher, they should not. While the “Bill Walsh” coaching tree is successful (although not as successful as it is made out to be), that does not make him a better coach. Indeed, Joe Gibbs won the same number of Super Bowls in the same era, with lesser talent.

No, the fact that this latest and perhaps last apple from the Bill Cowher coaching tree had a sour experience as a head coach says more about impatient, irrational owners and underlines how difficult it is to succeed in the NFL.