Taken from the grade book of a teary teacher who is sad to see his start student soon begin his “Life’s Work,” here is the Steelers Report Card for Roethlisberger’s final game at Heinz Field. 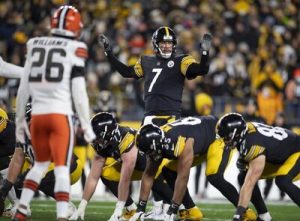 Quarterback
In his final outing at Heinz Field, Ben Roethlisberger went 24 for 46 for 123 yards with one touchdown and one interception. Ben didn’t get a lot of help from his receivers, but this game is a solid signal that it is indeed time for him to hang it up. Grade: B-

Running Backs
Najee Harris was on fire rushing for 188 yards including a 37 yard scamper that iced the game. His hustle was evident from the word go to the last snap. Big Ben is leaving the offense in good hands. Benny Snell had one carry for 2 yards and Derek Watt converted a fourth and one. Grade: A+

Tight Ends
Pat Freiermuth returned and caught 5 passes on six targets while Zach Gentry was targeted once for no catches. The run blocking was solid, which they helped with. Grade: B

Wide Receivers
Diontate Johnson had 8 catches for… 31 yards and a touchdown. Chase Claypool had 3 for 17 and was more notable for the catches he didn’t make (although there was simply some good DB work.) Ray-Ray McCloud had 4 catches for 35 yards, leading the team in receiving yardage. James Washington had one target an no catches. Grade: C-

Offensive Line
The Steelers enjoyed their best run blocking of the season by far. Holes opened and piles fell forward for the first time since the leaves started falling in October. Pass blocking was solid, but Ben did take two sacks. Grade: A-

Defensive Line
Cam Heyward was his usual lights out self, batting away two passes and sacking Baker Mayfield on third down. Isaiahh Loudermilk batted away a pass. The line did a good job in containing the run. Grade: B 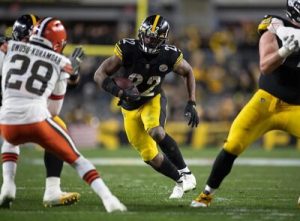 Linebackers
T.J. Watt strengthened his stake to be league MVP with 2 passes defensed, 3 tackles for losses, 4 sacks and 5 QB hits. Alex Highsmith added 2 sacks and made a key stop for a loss. Robert Spillane led the team in tackles. Grade: A

Secondary
Not a lot of fireworks here, but Minkah Fitzpatrick and Joe Haden each defensed a pass, as did Tre Norwood who also came up with an interception. The Steelers registered 9 sacks and that only happens if the coverage was good. Grade: A

Special Teams
Chris Boswell was 4 for 4 on field goals, including a 48 and a 50 yarder. Corliss Waitman did an excellent job punting. Ray-Ray McCloud was OK as a returner, although he did fumble one which he recovered. Kick coverage was OK, but Justin Layne’s two penalties were negatives. Grade: B

Coaching
The Steelers offense was hardly a juggernaut, but Matt Canada got the running game going and because of that the short passing game was effective. 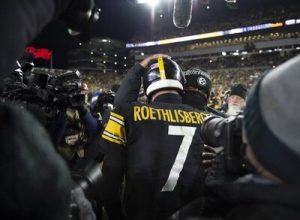 The Steelers authored a dominant defensive performance, the late touchdown notwithstanding. While Kevin Stefanski decision to de-emphasize the run AND put the game in an injured Baker Mayfield’s hands with a hapless rookie left to tangle with T.J. Watt is a head scratcher, the Steelers defense took advantage.

The Pittsburgh Steelers were singularly focused throughout the night from start to finish. The team wanted to win and played with the will to win. Yes, this was fueled by the emotion of it being Ben Roethlisberger’s last game in Pittsburgh, but that singular focus is a product of the locker room culture Mike Tomlin has cultivated. Grade: A

Unsung Hero Award
COVID and other injuries robbed the Steelers of their starting inside linebackers and area where the team was already weak. But Marcus Allen and Ulysees Gilbert III stepped up to do an effective job in the middle and for that they win the Unsung Hero Award for the Steelers win over the Browns in Ben Roethlisberger’s final game at Heinz Field.