The Pittsburgh Steelers uphill battle to upset the Kanas City Chiefs tomorrow night just got a little more level. In move that was totally unexpected as recently as five days ago, the Steelers have activated wide receiver JuJu Smith-Schuter from the injured reserve list. 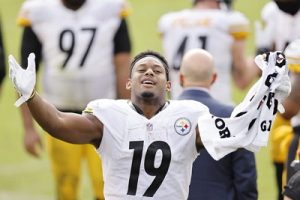 On Wednesday JuJu Smith-Schuster suddenly appeared in practice, with teammate Diontae Johnson confirming that he had idea this was coming until he saw JuJu putting on his cleats. Still, the expectation was that Smith-Schuster would sit this game out.

The Steelers have confirmed their decision to activate Smith-Schuster from IR while releasing backup punter Corliss Waitman.

God answered my prayers & I’ve recovered from my season-ending shoulder injury earlier than expected. I can’t believe I get another chance to take the field with this team and play in a playoff game to keep our season alive. Steelers Nation, #HereWeGo! pic.twitter.com/SdAKl3SrYx

It is huge move by JuJu Smith-Schuster. He could have very easily opted out of playing, eyeing the calendar and his next contract and no one would have thought any less of him. Instead, JuJu opted to prove his commitment to winning.

One might ask, with the emergence of Diontae Johnson, Chase Claypool and to a lesser extent Ray-Ray McCloud, can JuJu Smith-Schuster, who only had 15 catches for 129 yards before injury, really help the Steelers after not taking a snap in over a month?

The answer is yes, he can.

As The Athletic’s Mark Kaboly explained:

His return would be most noticeable on third downs. With Smith-Schuster in the lineup, the Steelers converted 46 percent of their third downs. Without him, they fell to 36 percent. A year ago, he was tied for second behind Keenan Allen with 24 third-down catches that resulted in first downs.

Defenses will be forced to respect Smith-Schuster and even if that doesn’t directly translate in to catches for Number 19, it will allow Ben Roethlisberger to hit targets like Pat Freiermuth

JuJu Smith-Schuster’s return also yields intangible benefits. Smith-Schuster is a physical receiver, as Vontaze Burfict found out when JuJu decked him as a rookie, forcing him from the field on a gurney.

While Smith-Schuster isn’t going to transform this team’s running game into well-oiled, road-grading machine, his physicality will help set the tone for blocking at the second level.

Harris Expected to Play, Steelers Must be Cautious

JuJu Smith-Schuster’s return isn’t the only bit of good injury news coming out of the South Side. It was also announced that Stephon Tuitt and Tyson Alualu were both…

…Got you, didn’t I? Alas, the Steelers aren’t getting either defensive lineman back this week, although Lord knows either man would be an instant upgrade alongside Cam Heyward.

The good news that the Steelers did get comes on the other side of the ball and involves Najee Harris. Harris of course injured his right elbow in the Steelers 2021 season finale against the Ravens. His participation was limited throughout the week and when asked about his status for the game, offensive coordinator Matt Canada admitted he was “Concerned.”

As of Friday Harris was listed as questionable, but the Steelers have removed him from the injury list and will play him against the Chiefs.

The reality is simple – with Harris, the Steelers have a chance against the Chiefs, without him they do not. Najee Harris is clearly the most talented player on the Steelers offense and his 188 yard performance against the Browns in Roethlisberger’s final game at Heinz Field signified a changing of the guard.

A decade ago RGIII led Washington to the playoffs en route to earning rookie of the year honors. However he was injured during that first playoff contest, but was put back in the game. Whether this was due to Mike Shanahan’s mistake or Daniel Snyder’s meddling the world will never know. It matters little now, as RGIII never the same.

Mike Tomlin and the Steelers medical staff must avoid a similar mistake at all costs.